Distances: anywhere from 0 to 12 miles

So, lucky Ciwt has been visited by her sister and then her best friend for 58! years (both named Betsy coincidentally) which has kept her too busy and having way too much fun to pay attention to her wonderful and loyal readers.  But now she is back to CIWT and back at the SF Opera.  That latter is due nearly entirely to her afford mentioned Betsy friend who has been an opera buff nearly as long as she's been Ciwt's friend.
When this Betsy got wind of the fact that the SF Opera would be having an Open House after her visit, she began reading outloud to Ciwt the events at the Open as well as leaving copies of the Open House schedule in very visible places around Ciwt's place and saying she couldn't wait to hear details from Ciwt.  In other words, Ciwt couldn't possibly miss the event.
And thank goodness!  It was so well done, really almost at the level of one of the SF Opera operatic productions. The last Open House they gave was in 2013 after which many things intervened to prevent another- including the obvious for the past 3 years.  But this, 2022, was their Centennial year and they were going to have an Open almost come hell or high water.  Planning began 4 years ago so Ciwt's readers can imagine the level of production all these talents reached.
Ciwt guesses over 2000 people of all ages came to celebrate and be educated.  The energy was attentive, respectful, happy, and grateful after the pandemic - all of which characterized Ciwt. She attended most of the events on the schedule with the exception of the extensive Backstage Tour which was sold out the couple of times it was given.
Highlights were "How to Direct an Opera Scene" presented by the SF Opera's Assistant Stage Director.  A few of Ciwt's favorite tidbits from that were: 1. In scene rehearsals the singers usually sing softly to save their voices, 2. The stage manager creates and directs all supernumerary silent background action.  Think of those crowd scenes at the opera where there might be 100 people; each of them is acting a pantomime devised and rehearsed by the scene director.
In another highlight presentation "Conducting Lessons" Ciwt and others were taught how to set the musical pulse of the orchestra with their right arm and how they might make various signals to the musicians with their other arm and gestures.  Ciwt's main takeaway from that was that her arm got exhausted even after a few minutes.  She reported that to the Assistant Conductor and learned that, indeed, keeping arms lifted for long amounts of time requires some sort of fitness training (he swims), and even so, it is very common to see conductors with ice packs on their shoulders during intermissions.  It was also interesting to learn that the conductor must know the way each instrument produces sound so they can time the instruments' various entrances into the piece.  Also that the conductor is the only one with a full score that has every single instrument's score on it while the players have smaller scores for just their instrument.  Conducting turns out to be an extremely complex skill taking many years and much exposure to reach a level of proficiency - so most conductors are in their later years when they rise to that position.   Almost all begin their musical training as piano players. 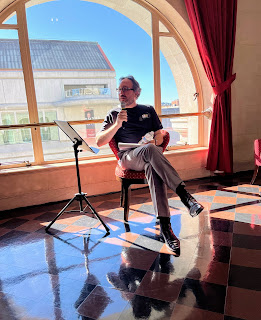 SF Opera General Director, Matthew Shilvock
The creme de la creme of presentations for Ciwt was the "Ask Me Anything" one given by the SF Opera's General Director, Matthew Shilvock.  SF is an opera loving city, the questions were many and excellent and our General Director personable, a fountain of knowledge and impassioned about his field - as well as his San Francisco audience.  At the end of an hour of questions and answers he had to end the still energetic session so other activities could keep to their schedules.  Of the many wonderful tidbits Ciwt took away, these are a few favorites.
- Opera season planning begins 5 years or more ahead.  The first thing that determines the season is the availability of artists.  They must have those stars under contract first, not an easy matter for busy international talents.  That done, the second item on the planning schedule is production, meaning bascially sets and costumes.  Sometimes those are rented, sometimes the expenses are shared with co-producers, sometimes the opera company builds or uses their own sets and costumes.  The latter is the most expensive up front, but becomes more and more cost effrctive with productions that are done often by the company. The final stage is fitting together all parts of the jigsaw puzzle that will be the actual season - rehearsal schedules, stage times, events for patrons, etc, etc, etc.
- Wagnerian opera stars are standouts in three principal areas: voice, stamina and theatricality.  Shilvock used an example to convey the demands of that last, theatricality.  In Parcifal one of the female stars has exactly two notes in a one hour act, so there's the stamina: keeping her acting at high energy for the entire hour.  The drama comes in presenting those two notes in such a way as to rivet and tear into the audiences' emotions.  A rare few can do this and are held in awe.
- Ciwt could go on and on.  Every question and answer was so absorbing.  As Shilvock said at one point, over 1000 people work for the SF Opera Company every season and everyone of them - from wig maker, to scheduler, to chorus and more - is at the very top of their game.  So it is pinch yourself thrilling to have his job and actually was that way for the 5 hours of today's superb Community Open House.
Happy 100 San Francisco Opera.