Lots of nice looking dresses at the Oscars last night, so Ciwt can't have fun dissing.  But she can comment on a few things that do nothing for her. 1. The slit* that goes all the way up to what must by gym shorts or something and reveals a not particularly attractive part of the female anatomy: thighs.
2. Slits that reveals a bare chest - on flat chested stars. 3. Beige lace with black underpants. 4. Pants that draw the eye directly to the crotch.

In a very competitive field, this is Ciwt's choice for Best (ie, most becoming) Dressed:

*Warning: Don't look in Urban Dictionary for current use of this word.
Posted by Ciwt at 6:26 PM No comments:

Oscars always means a Big day around Ciwt's place.  This year she predicts few surprises: Revenant, its Director, Leo, Brie Larson, Son of Saul, Inside Out, etc.  The only suspense is in the Supporting Actress and maybe Supporting Actor categories.

She hopes Chris Rock is terrific and, as always, that some one will wear

or do something amazingly memorable.    The Red Carpet is already on so gotta go.....

The great thing about the Oscars for us buffs is there are always surprises.  Sometimes bad; sometimes good.  This year they were good: Not Revenant but the much better choice Spotlight and not Sly Stallone but the distinguished actor Mark Rylance.  Or neutral: For the most part attractive dresses and menswear.
Posted by Ciwt at 2:32 PM No comments:

First, after years of negotiations this exquisite painting was allowed out of Italy for the first time since it entered Rome's Galleria Borghese collection in 1682.  It was painted by Raphael, considered one of the three greatest Renaissance artists (along with da Vinci and Michelangelo) when he was just 22 years old.  Lady with a Unicorn is considered a treasure on a par with the Mona Lisa, and she comes with a complicated and mysterious past. She's right here in San Francisco at the Legion until April 10 where she has attracted many admirers as well as scholars hoping to finally resolve her mysteries.

And then in Southern California, the Highway Patrol was getting calls about a unicorn loose on the highways. At first they thought it was a prank, but it turned out to be marvelously true. And because the Highway Patrol is sort of rusty on capturing unicorns, she eluded them for three hours and finally had to be captured by a maiden on a horse. (Don't believe it?  Click on the underlined area)

About all this unicorn, Ciwt says Good; you can't get enough unicorns!!

Ciwt might have spoken a bit too optimistically yesterday about our fogless Spring.  She was just out at the Legion when the you know what blew in; luckily she was wearing her down coat.

But some poor bride-to-be wasn't.  She -
in a sleeveless, low neck gown - and her
wedding party were there with her professional
photographer.  Brrrr.....
Posted by Ciwt at 5:43 PM No comments: 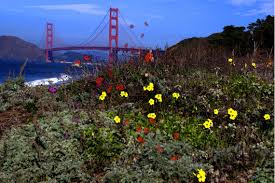 Ciwt is out of the museums and into our glorious, fog free (kind of) Bay Area spring.

Another day at the museum, today the de Young,  for Ciwt which turned out to be about feathers. 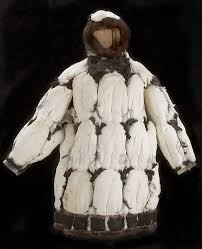 And the trompe l'oeil  painting above where the artist, Alexander Pope, has painted the feathers so perfectly they 'fool the eye.'  This trompe l'oeil effects was one of Pope's goals with the striking painting, but overriding that was his desire to make his viewers' attention and make them look at the beauty of the bird. Instead of shooting it.  The species was on serious decline in North America, and Pope, an active hunter, had  somehow turned a corner on his love of shooting the wildlife around him and became one of the first active North American spokespeople for conservation.
Posted by Ciwt at 7:14 PM No comments:

Walk: Legion of Honor (Bonnard show)
Distance: A Few Blocks (but museum floors can be brutal on feet), small yoga

Pierre Bonnard, Portrait of the Bernheim Brothers, 1920 Oil on canvas

Here are Bonnard's dealer/'friends.' They are twins but Ciwt was interested that one twin is painted prominently with detail about his looks whereas his brother in the rear looks a bit like a diminutive wooden dummy.

Then she saw another of Bonnard's paintings of the brothers - actually commissioned by them for the home they shared.  Look what has happened to that 'dummy' brother in this one!  Ciwt can't help but wonder what Bonnard was up to; whether he had some unspoken problems with this brother. Bonnard was always the psychologist often interested in estranged intimacy and the secrets and hidden things that surrounds it.
Posted by Ciwt at 5:51 PM No comments:

Suddenly Ciwt has many things to unpack, organize, learn and do...Fun!
Posted by Ciwt at 6:37 PM No comments:

So, if she seems a little preoccupied as Year 5 begins,  Ciwt is considering starting a new business.....
CIWT readers will be the first to hear if ....
Posted by Ciwt at 6:19 PM No comments:


*Thanks Andrea and Rich and Supportive Readers, Ciwt 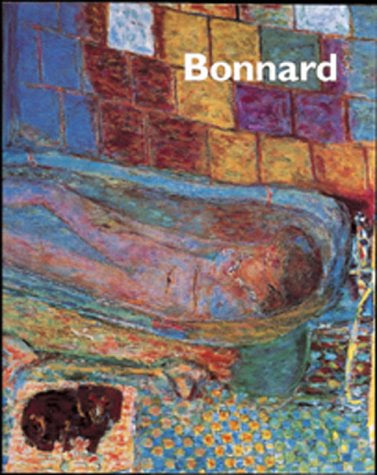 Ciwt went to the Legion's Bonnard show Painting Arcadia expecting an easy viewing.  That is, she has seen and liked - for their colors and easy, patterned intimacy - Bonnard paintings since college and thought she would be simply pleased to encounter a bunch of them together.

Instead the experience unsettled Ciwt.  Bonnard was more complicated - dark, unhappy, starkly realistic if you will.  The life he records is not the warm homebody togetherness his gorgeous colors promise.  Even the cute and nearby pets seem detached.  Hmmm.  Back to the drawing boards with her thinking and research.

Before going ahead with that though, Ciwt wants to share a peculiar association she made at some point in the show, particularly when she came upon its bathroom/bathing section.  Ready?   Bonnard and Bush.  Remember those Bonnard animals from yesterday and today's bather and then remember these images of George W. Bush's paintings (some of which were first released to the world by the hacker known only as Guccifer. 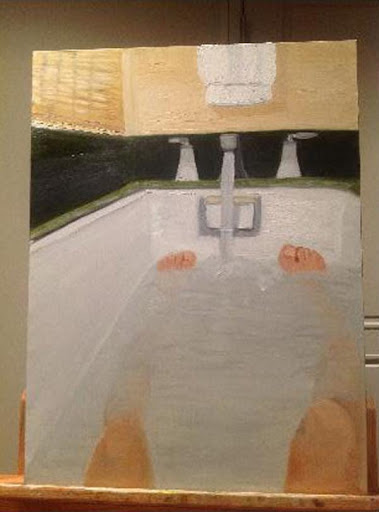 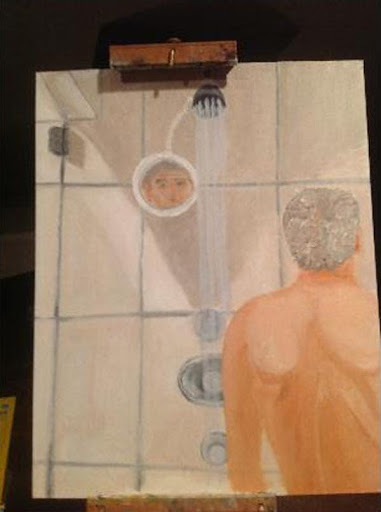 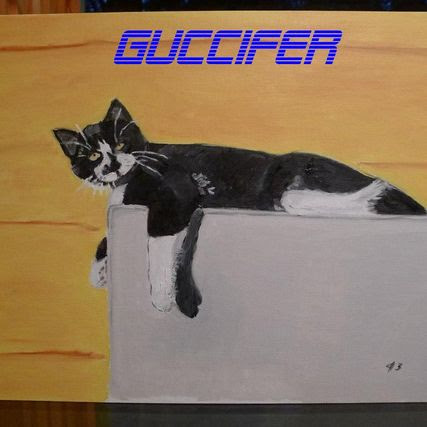 Ciwt loves the animals Pierre Bonnard included in so many of his oil paintings of everyday life. Here are a few. 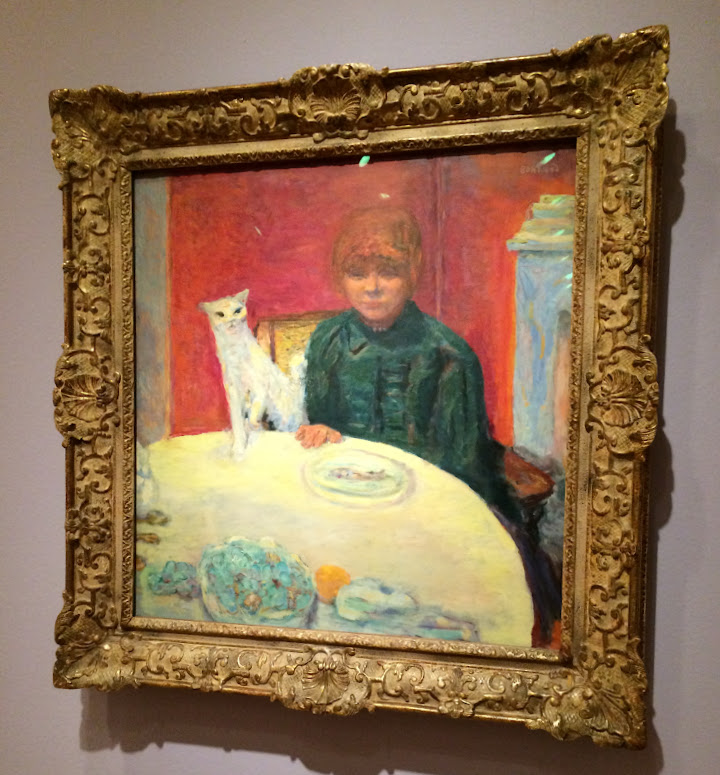 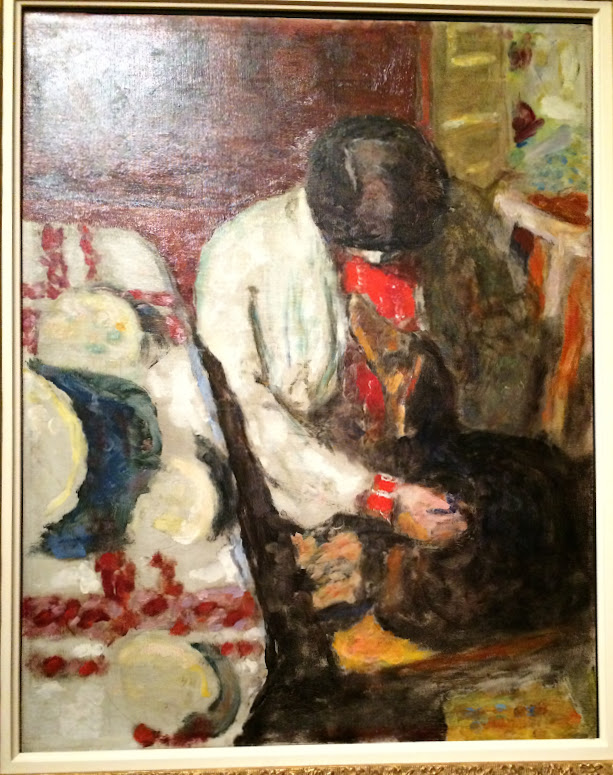 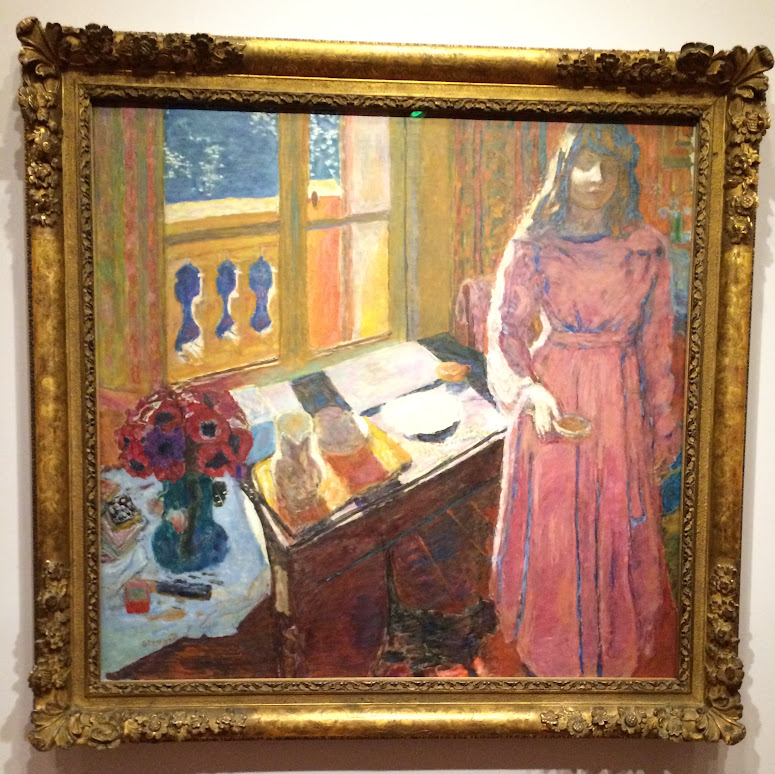 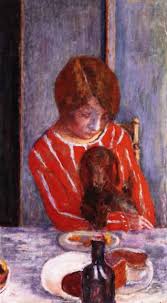 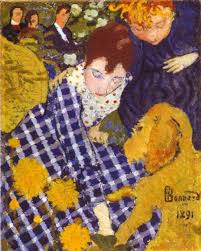 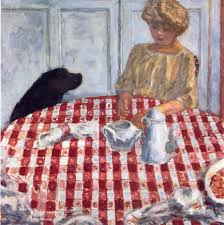 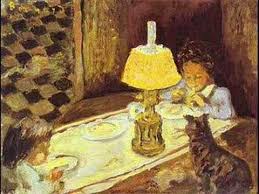 *And here's the actual chat in a photo taken by Bonnard in the early days of photography: 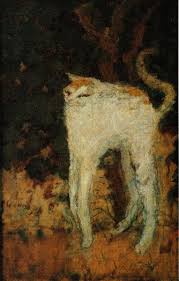 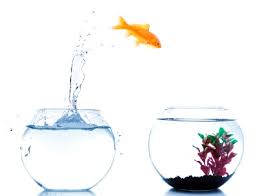 Oh, goodie, another opportunity for Best/Worst Dressed even though Ciwt doesn't know who most of the Grammy people are.  12 more days to the Oscars!!

Ciwt's Best at the Grammys

Ciwt is also dusting off her knowledge of the de Young Museum: 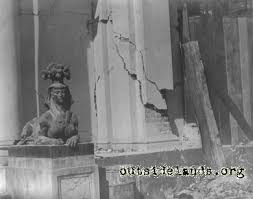 It looked pretty fancy and well-built when you went to it, but i-yi-yi, it was just a bunch of plaster over one layer of bricks and a few wooden beams.

The new museum is solid (and controversial - especially that tower).  Ciwt likes it a lot.
Posted by Ciwt at 5:43 PM No comments:

Ciwt is still busy dusting off her knowledge of the Palace of the Legion of Honor.  Interesting: In this old post card there is a road upper left that (except for a small stretch near the museum) doesn't exist today.  Probably too unsafe because of cliff erosion.

Walk: No
Distance: 0 but home yoga

Ciwt is dusting off her knowledge of art at the Legion of Honor and came across this paper she wrote:

So, why the question mark after the artist’s first name?  Louis was one of three never married Le Nain brothers who were all born in Laon, formed a workshop together in Paris, painted similar subjects collaboratively as well as individually, specialized in paintings of peasant life, stopped dating their works early on and never signed their work with their first names – just Le Nain. Clearly this has made life a challenge for art historians, and it has become common to treat their work as a single artist.

One brother though, Louis, is regarded as the ‘genius of the family,’ (1) and there is scholarly agreement (although no proof) that this canvas ‘can only have come’ from him. (2) Louis is described as appearing to have been a somber artist, pensive and self-contained, who shunned elegance and restlessly explored new horizons.” (3) With their air of melancholy, it could be that he modeled these peasants on himself.

Everything about this painting is earthbound and everything on the earth Le Nain paints is bound to each other. This is largely achieved by his overall use of subdued, chalky greys and ochres.  The earth, the clothing, the stone of the house, the dog, the pet rooster, the skin tones – even the sky - are in these muted hues.  The sole exceptions are the red cloak, the rooster’s comb and a red sleeve in the background, and one senses these were simply painterly decisions to add some contrast and energy to the canvas.

In many technical ways this is a remarkable canvas. Le Nain’s brushwork is confident and proficient.  At times he paints loosely, openly as in the sky, at others his shading and attention to detail make for beautiful portraiture, and finally his fine brushwork carefully delineates the wispy grasses on the shed’s roof and the details of the mother and child standing on the stairs in the background.  The peasant poses are static but varied and point to Louis’s known ability to “make a thousand different poses taken from life.”(4) The overall the composition is unified by a network of straight lines which intersect most dramatically at the man and boy in the foreground and is noteworthy its unusual and high abstractness. (5)

Besides binding earth and peasant, the monochromatic palette lends a quiet, stable air of dignity almost serenity to this family grouping.  They may be peasants but we do not get the sense they are threadbare, destitute, lonely or in emotional or physical impoverishment.  They have each other, infants, pets, a solid home, things look clean, their bodies appear strong and healthy.  Rather than being unhappy, they are calm, expressionless, restrained, at worst stoic from hardship.  In many senses their balance and restraint echoes classicism as does the statuesque stance of the father, the loose, flowing draping of the clothing worn by the three figures in the foreground.

However, for all its realistic and sympathetic portrayal of peasants, there are some critics who question how “taken from life” Le Nain’s work really was.  Are these really peasants of their time?  Assuming Le Nain painted the peasants with which he was intimate, those of his native Laon, these peasants were living in the midst of the Thirty Years War.  This was a time of severe hardship, anguish, depredation by cruel armies marauding and living off the countryside.  Yet these peasants are portrayed as calm, almost docilely engaged in homely activities despite real world conditions around them. Because of this disparity, some scholars have suggested Le Nain intentionally downplayed any misery to please wealthy urban patrons with these paintings. (5)  I believe this thinking is reinforced by the miniature Madonna and Child on the steps in the background which would also have appealed to the patrons who, being French, were almost entirely Catholic.

But in conclusion, whether or not these peasants were entirely realistic in their portrayal, it is highly significant that they were portrayed at all and so masterfully.  Their inclusion as subject matter represents a very original continuation of Caravaggio’s early Baroque humanism as well as the peasant paintings of 17th C Holland.  More importantly, Le Nain’s art was placed in the Louvre in 1848, and likely had an effect on Jean Francois Millet, the influential painter of melancholy scenes of peasant labor, as well as the great French Realist Gustave Courbet. 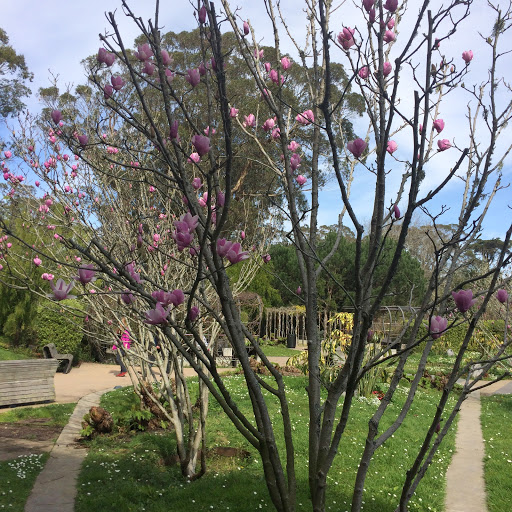 Saucer Magnolias. Here they come.  Soon they will be showy - some up to 10 inches across - and for a while the real art will be outside the de Young Museum. After all, the story goes the saucer magnolia was developed to bring beauty back to the European landscape after the Napoleonic Wars. 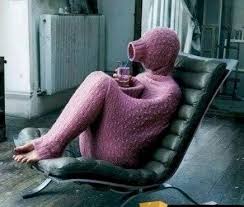