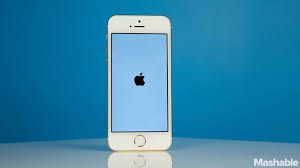 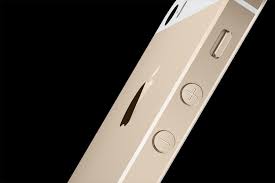 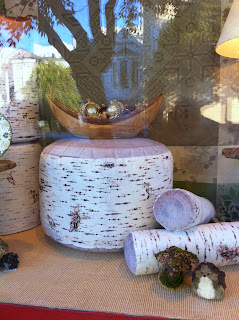 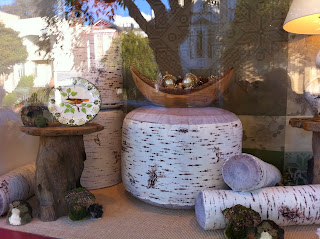 A Thanksgiving Feast for Lemurs at the San Francisco Zoo
Posted by Ciwt at 5:51 PM No comments:

Lunch with a cousin and into family memories, a rare pleasure/opportunity.  He has my grandmother's early diaries. She lived in Minnesota, but I am interested/amazed to see that in 1912 she traveled to Philadelphia, Paris, and Rome to see six operas (Butterfly, Sampson, Wm. Tell, Pagliacci and two I can't make out). She would have been 20 that year.  Never in all my growing up did I hear any references to opera.  Previous trips (I never knew about)  included cruises to the West Indies (age 13), Naussau (age 14), England (age 16), Spain and the Mediterranean (age 18).  Her father was a successful industrialist/adventurer, and I believe she often traveled with him. 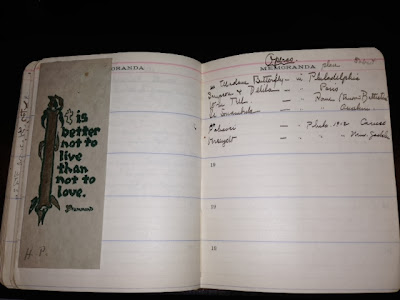 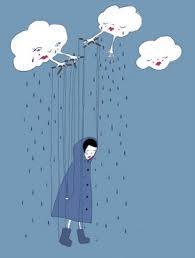 
Except...this year it feels like it is going to be very, very mild.  Not sure why. I believe some things have deeply shifted.  Fingers crossed and compassion for those who are affected as we move into the eye/depth/(dim) heart of the season.
Posted by Ciwt at 6:40 PM No comments: 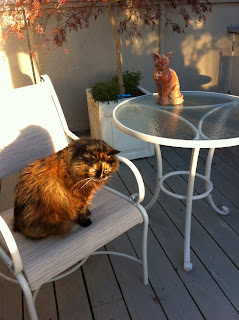 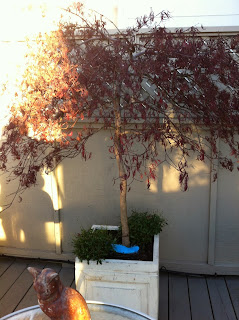 One Tree
that nearly broke my heart the other day
when I went out on the deck and found the
leaves all shriveled and dry.  But, Andy to
the rescue.  Turns out it is natural for it
to go dormant at this time of year.  It will
eat up all the blue fertilizer and be plump
and endearingly red by spring.

*
At the Hockney show my friend and I spent the most time in front of his immersive multi-video montages of the English countryside.  They are shot with nine cameras and projected at different film speeds thus presenting a fragmented view that approximates the actual way we experience reality.  We take in a scene initially then our eye roams and fixes on different objects of interest. The videos with their pure color and multiple foci are startling simple; at one point in this winter montage a black bird flies off of a snowy limb and disappears into the sky.  Completely natural and breathtaking; it is as if you've never seen a bird before.

Interestingly in yesterday's Hockney Symposium at the de Young, Wider Vantages Are Needed Now, these videos are the works (among hundreds in the show) that all of the artists, filmmakers and technical 'honchos' chose to focus, comment on and compare to their own work.  This was not scripted, it seems everyone came to the montages on their own - and some had not even seen them and were literally blown away that Hockney is pursuing the exact same questions in his artistic life as they are in theirs.

This was my first real understanding of the depth and seriousness of the inquiry into the actual way we see that was begun by the Impressionists and stated even more clearly by the Cubists.  It is often said that after Les Demoiselles d'Avignon, nothing in the art world was ever the same. Clearly Hockney and the other guests assembled at his symposium would agree and are relentlessly on the trail of somehow capturing the reality of how we experience reality. 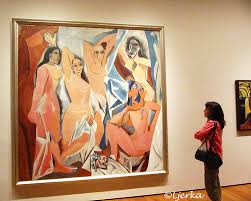 A ciwt few takeaways from the symposium:

- Trevor and Ryan Oakes (young artists)  discovered that the nature of light is spherical.

- Gail Wight (young artist) made several videos demonstrating that the living organisms in our stomachs may be very responsible for our psychic lives.  (ciwt: wondering if the stomach actually initiates rather than simply responds).
-  The filmmakers were (not surprisingly) my favorite of group of presenters.

John Gaeta (Matrix), Florian von Donnersmarck (The Lives of Others,..), Dennis Muren (8 Academy Awards for Visual Effects,..).  At one point the film, Gravity, was brought up, and I think the moderator expected the filmmakers to praise it.  Instead, to a man, they panned it!!  (Yes!). Best that could be said was that it was like a good space ride at a theme park.  But, even then, they thought Disneyland's Back to the Future is much more inventive, pushes the edge of camera work. Donnersmarck's ten year old daughter came out of the theater saying "Daddy I don't want to go into space."  So much for young girls being inspired.  (See ciwt 2/274 re: Gravity)

-  The Digital experts (Blaise Aguera y Arcas, Alvy Ray Smith and Peter Norvig) all sounded like they were giving mini-versions of their TED talks.  Don't know whether this is because what they are involved in is entirely in the doing and not easily verbalized to the 'common man.' I'm hearing a recurring theme with tech presenters:  something along the lines of everything technical expands by a factor of 10 every five years coupled with 'hold onto your hat' because we have absolutely no way of understanding or predicting how utterly different things are going to be.  I keep listening for more, but consistently hear a tone of resignation.

It was fun seeing David Hockney sitting in the front row truly absorbed.  Wonder what he'll produce next. 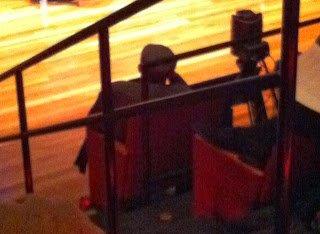 *If you're wondering why you see multiple 'Winter' images, Blogger has this little trick of disappearing pictures ciwt has added on her 'compose' page.  Thinking it is gone, she adds another (maybe another if the space goes blank again). But then in the actual post she finds Blogger has included them - all!. No remedying this - sigh, resignation.   Today though the multiples might be appropriate....

Just back from spending the day rubbing eyeballs (when they weren't rolling around in my head) with the artists, filmmakers and technies that live the same questions that drive David Hockney. Better to let the fairy dust settle (if it does) overnight.  Stay tuned...

Meanwhile, for you techniks out there, feel free to drool over these names: 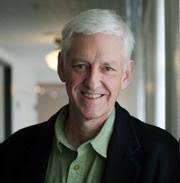 Peter Norvig
Posted by Ciwt at 6:13 PM No comments:

Had my annual medical 'exam' today.  My primary care doctor is a young naturopathic physician so what 'annual exam' now means is: have blood work ahead of time and then spend about an hour just talking through ciwt's life and health.  Maybe figuring out little modifications or additions here and there - with any meds a sort of last resort but still an option.

I like this.  I feel heard, that he knows me a bit.  I also feel 'empowered,' like health exists in the real world, is comprehensible - not some exotic territory that only doctors know.

Among the topics was Dr. Google, aka Dr. Net.  I told him about my propensity to go right there. And to always learn what kind of cancer I have because, if you go to Dr. Net, you will have cancer.  We discussed real onset progressions - ie, 'c' does not just instantly strike - as well as the virtual impossibility of self-diagnosing on the internet.  Hopefully I will retain this discussion; if not, he is warned and can resume re-training me.

So, the good news is that medically I'm officially 'at least' ten years younger than my years.

I was so happy to hear this, I went straight to Best Buy and finally bought that lightweight iPad air.
Now, let us hope my fingers will never walk it to Dr. Net.

There's  a scene toward the end of the movie Lincoln where Tommy Lee Jones playing Thaddeus Stevens comes home, takes off his dark brown wig and we see he is entirely bald.  Until today I took this to mean Stevens was either much older or sicker than we realized.  And that may in fact be the point.

Or not.  Except in the legal profession, the wearing of wigs by men was pretty much out of fashion by the time of the Emancipation Proclamation.  But - being a true character - Stevens could still have chosen to wear one.  Indeed he may have been bald, but, it was also common for men who wore wigs to shave their heads - wigs then being an all or nothing proposition.  Our first five presidents from Washington to Monroe wore (powdered) wigs; I don't know if they shaved their heads.

Wig powder was made of starch and could be scented with essences such as lavender, but I doubt scents were used in the proudly plain United States.  On the continent wig powder often served to protect men from infestation by lice and, in general, the white powder was thought to confer sagacity and maturity as well as social status.

There is a long history of wigs going back to ancient countries and then coming in and out of fashion.  But, whenever wigs were in fashion, they were only worn by the upper ranks and classes as symbols of their station.  Women rarely wore full wigs but, instead, worked extensions of various shapes and fullness into their natural hair.  A notable exception is Queen Elizabeth I, who wore a very red wig covered with tight curls.  Ciwt does not know if she shaved her head.

All this wig wearing - even by some fighting men - rather fascinates ciwt who actually owns one.  She can't get around to wearing it though.  For thing, the way wigs are made requires that the entire head cap be covered with hair (otherwise you would see the fabric), and the attachment point of each strand is bulky.  So wigs tend to be ultra/unnaturally-for-many/ciwt thick, and the hair doesn't begin falling directly at the cap because of the bulk.  (If you see a TV anchor whose hair begins about 1/2" above his/her head, you can be sure they are wearing a wig or fall.  And these days you see that a lot).  Anyway, wig hair is often long and in need of cutting which presents a couple of problems: 1. hardly any hairdresser knows how to work with wigs and 2. there's little wiggle room for exposing the cap/ruining the wearability of the wig.  Finally, wigs are hot, heavy and itch. 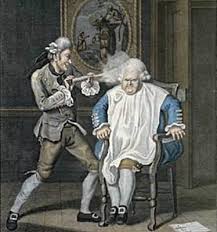 The English are known to be ruthless - discarding plants whenever it suits them.  Not ciwt.

Euphorbia survive my intense greenhouse window, and when they get too much like cactus, I can't bear to throw them out.  So I find little places for them to continue on.  Even Andy, the gardener, was amazed to see such big ones.  But he's in the plant saving business himself so there are all sorts of plants around the building being fluffed up, fertilized, coaxed ever onward. 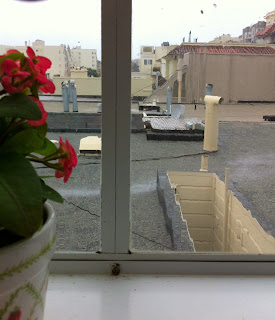 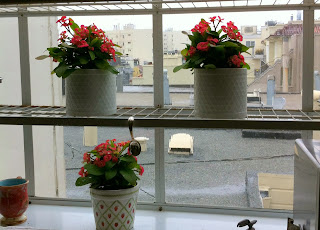 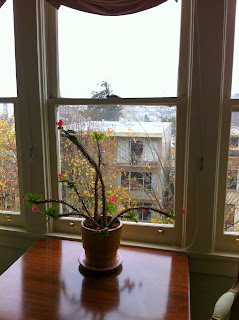 "Because if you stay inside for a few more years, you'll grow this big!"

Okay, I think I've finally resolved my thinking on Anders Zorn's art.  To wit, he is the most perfect watercolor artist I have ever encountered.  His watercolors look in images like they are oils.  But instead as Zorn handles watercolor he achieves the luminosity and depth of oils. Skin tones glow naturally. Water displays shape,movement and sparkle color so true it comes across like a photograph.  He's truly a watercolor genius, painting on small, medium and very large sheets with the same virtuosity.

These are watercolors (many of them 2'x3' or larger , flawless with no underlying drawing.  You have to be brave, utterly assured, a technical master to do this.  As you look at his show, you can hear artists commenting on how extremely difficult this level of proficiency is, especially capturing water): 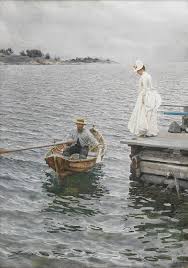 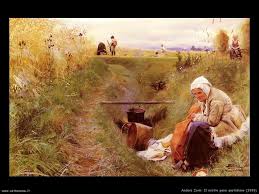 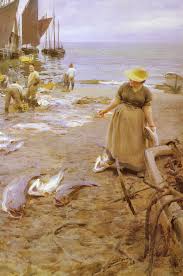 ETC...(and amen to my grasping Zorn obsession.  I think)