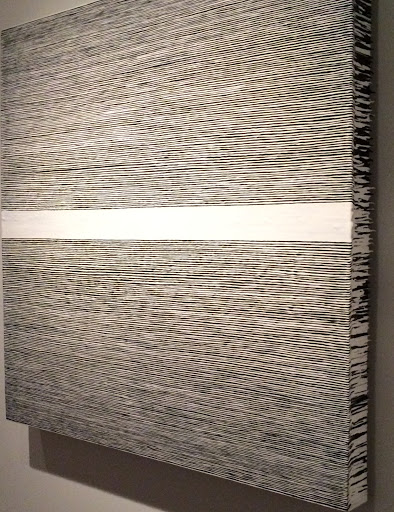 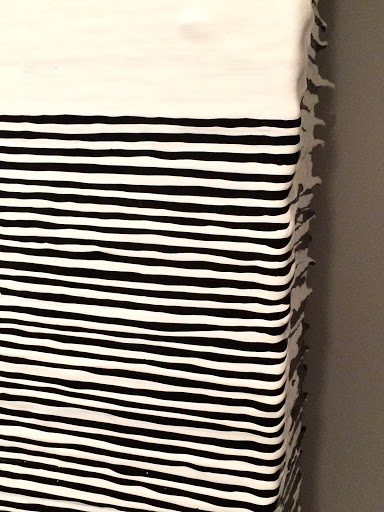 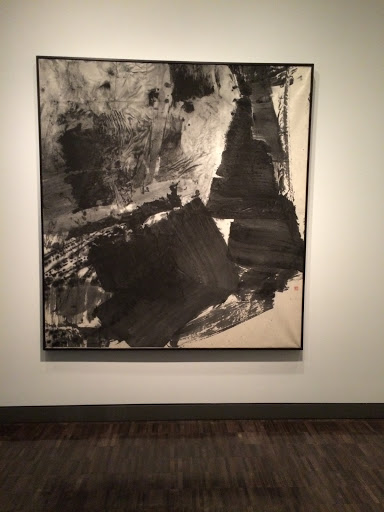 
Very interesting. There were moments in the current Asian Art Museum show of contemporary Chinese painting when Ciwt could have sworn she was back at MOMA in the 1960's.  But in achieving similar images with similar media, the Abstract Expressionists were coming from entirely different philosophies and making entirely different artistic statements from the young Chinese artists in the show.     To be continued.....

Ciwt took her first look at Fall clothes today, and somehow feels she could pretty create the 'look' with things she already has.  But it's early and her favorite clothes season, so surely something will eventually call to her. Plus around here, it will soon be a month or so of hot, sunny what others call summer.
Posted by Ciwt at 6:24 PM No comments: 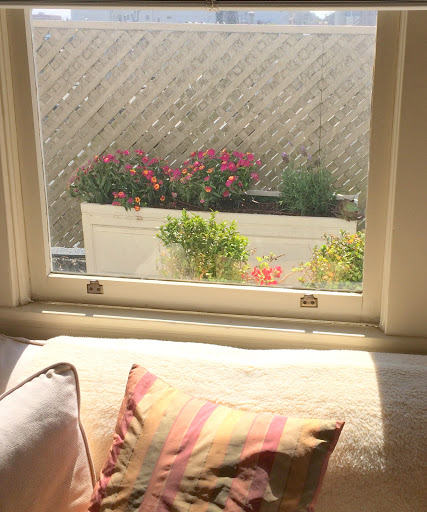 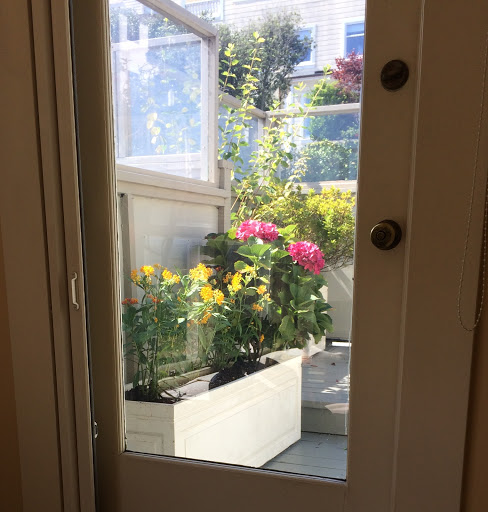 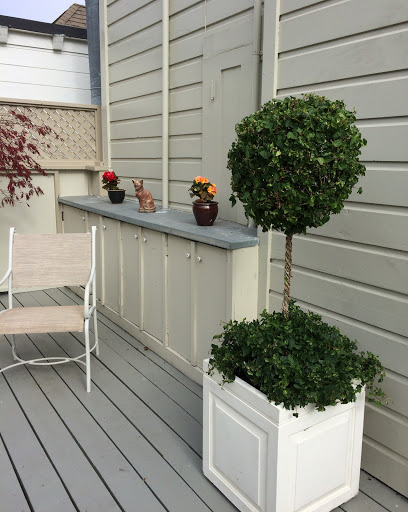 Ciwt came home and found that Andy, the gardener, had (by request) removed her remaining succulents*.  Now the search is on for some (traditional English) cutie-pies to take their place. And, not to worry, Andy has many clients around the Bay Area, so Ciwt's succulents are sure to find appreciative new homes...

So Ciwt met a cute guy who started talking to her at a museum.  He called and he and Ciwt talked about a time/place to get together. We settled on mid-afternoon.  Somehow Ciwt mentioned something about having a cat.

Him: Did you say cat?  I'm allergic.  I was looking to spend some time in the city.
Ciwt: Well, then I guess that's kind of it..
Him: Not necessarily.
Ciwt: Hmm. Well, my place would have a cat.
Him: Any thoughts on where we could meet?
Ciwt: I have some thoughts on places just across the Golden Gate bridge since you're across the bay.
Him: That's two tolls for me.
Ciwt: It's by far the most convenient.
Him: Each one is $5.  The Bay Bridge is a pain but only one toll.
Ciwt: Silent.
Him: We'd have to be careful with the price wherever we go.
Ciwt: A cup of coffee or glass of wine shouldn't be that much.  Or you can have water; it will be mid afternoon.

On and on it went like this.  Every Ciwt suggestion was instantly removed from the table.  Including the one where he made the selection and she'd show up - even in Marin.  His response to that was: "Oh god, I'll probably spend all weekend trying to decide."

Eventually Ciwt decided to be firm about her original assessment: That's kind of it.  He seemed to be mystified about why she thought that but sort of accepted it.  "Well, okay..."

Cute guy (used to be a child star); kind of sad.

, Ciwt is getting close to being officially in love with Jake Gyllenhaal.  She's certainly totally impressed with his determined effort (and success) at
upping the quality - and memorability - of his performances.  In the intensely visceral and bloody boxing movie, Southpaw, Gyllenhaal plays right up next to the great Forest Whitaker and matches him line by line, expression by expression, body language for body language.  Not easy.    Also not a great movie, but filled with excellence from many of the actors.

Ciwt is feeling better and better about her non-traveling ways these days. - for herself and the beleaguered destinations.
Posted by Ciwt at 6:15 PM No comments:

One of those days when Ciwt sits down at her computer with telephone at her side and gets through all those emails, appointment and reservation bookings, business type phone conversations.  Oh boy, wait til you hit retirement if you're not there. Your own life has so many details to attend to you'll wonder how you ever found time to work.  Oh, and your cat will find you boring.

(not Ciwt and Callie)

One of the greatest English painters of the nineteenth century, J.M.W. Turner
was celebrated for his brilliant depictions of light, the virtuosity of his technique,
and his extraordinary Romantic imagination. Experience the first major survey
of Turner’s late career, when the artist displayed a fierce engagement with
grand themes of nature, history, and religion.             (https://deyoung.famsf.org/turner)

Ciwt realized the other day she hasn't returned to the Turner show at the de Young since her brief late afternoon spin through it a month or so ago.  Usually when a local museum has a show she finds stimulating, Ciwt goes multiple times so her actions have spoken: the show didn't really speak to her.

It's a wonderful opportunity to see Turner's works, very few of which are in the States.  So, for that reason alone, the show is recommended.  But, it's thin. Several paintings - perhaps the best - from the original Tate/London show didn't come across the Pond.  What is here is just barely, barely enough paintings to make it seem like an important show.  They fill a couple of rooms before the many watercolors and other works on paper begin.  Then, in the last rooms a few more paintings - a whole wall of which Turner would have called unfinished even though the Tate doesn't seem to.

It is difficult for Ciwt to pinpoint where the draw for her isn't.  Surely the Tate had ambitions for an interesting, educational show as you can see from this video on their website.  Maybe it is because Turner's work is so romantically and often emotionally strong and his colors speak so vividly that Ciwt didn't really want to study each one intimately and closely.  None of the works really prompted her to think or care about how old he was when he painted them or to get more informed. (Maybe it would have helped if there had been representative works from other times in his life to compare with the late works.  But, truth be told, his late works weren't all that amazingly different from his early works).   Each of Turner's finished works speaks for itself, has the capacity to move the viewer at face value.  Just one painting - watercolor or oil -  imparts so much. But many together, one after another, somehow break his spell or diminish his impact.

Ciwt will return again next week with a friend, and perhaps will modify her judgment to date.  CIWT readers will be the first to know. 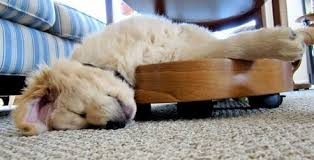 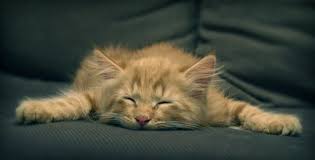 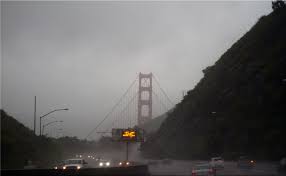 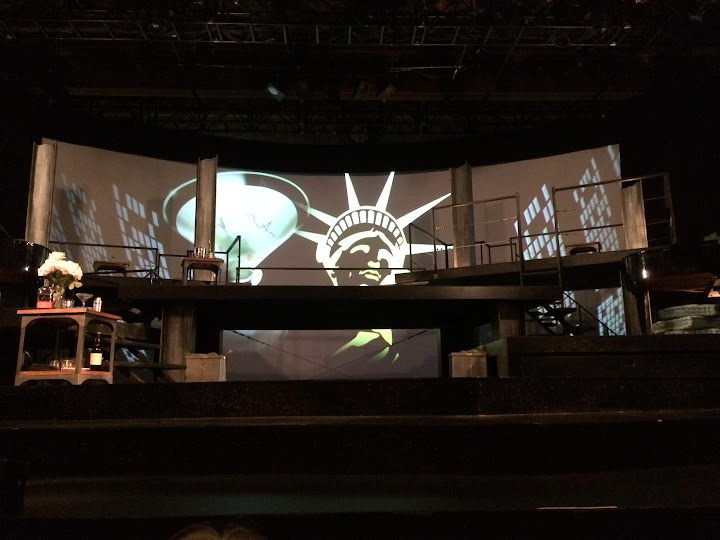 Tonight Ciwt had a good seat at small SF theater for a so-so 'classic' Sondheim musical (Company).
She came, she saw, she went home which meant she had more direction than the play which basically went nowhere in a pleasant enough way.
Posted by Ciwt at 10:53 PM No comments:

Ciwt grew up with hunting dogs  (Golden Retriever),  (Chesapeake Bay Retriever) and, it turns out, the mistaken idea that these large dogs were the only ones that retrieve.  Now she lives near one of the few remaining San Francisco parks that allow off-leash running.  And she sees all sorts of dogs retrieving whatever their owners throw out

So Wonderful to watch!!!

Walk: Vogue Theater (Trainwreck) and around a little in our unusual balmy weather
Distance: 1 mile

She'd really like to talk about how nothing is more depressing to to Ciwt than obtuse, vulgar, unfunny comedy.  But because she can't change current comedic tastes, Ciwt will go with Salon's Andrew O'Hehir brief assessment: “Trainwreck” is not very good, but Schumer is frequently amazing in it. Officially, her fans will not be disappointed; not far below the surface, it’s a bummer. 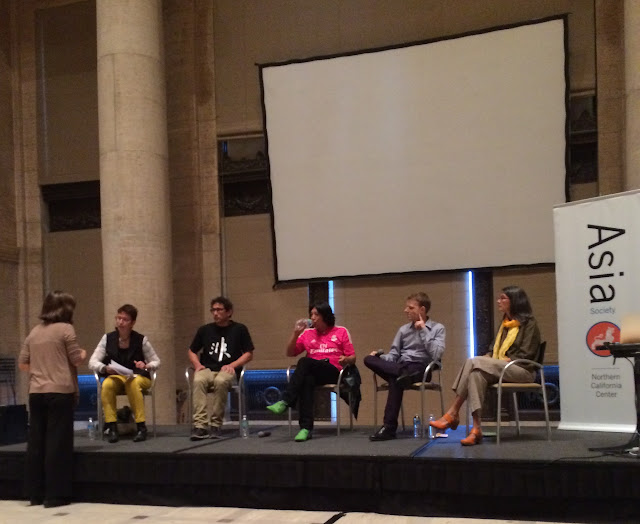 Ciwt is still excited by 28 Chinese, a current show of contemporary Chinese artists at the Asian Art Museum.  The works have the kind of energy Ciwt hasn't seen since the 1950's and 60's in New York. In that exuberant era when American artists were exploding into their own, when New York was replacing Europe, especially Paris, as the art center of the world. The tail end of  Abstract Expressionism, the beginning of Pop Art and more 'breaking free' art movements. Unexpectedly, there was that artistic energy on the Asian Art Museum walls!  Wow!

So today to learn more Ciwt went to a panel discussion of some of the current Chinese 'honchos.'  Professors, web site founders, bloggers, rocks stars turned activists, all with constant East-West connection - today's honcho types. The panel touched on the 28 Chinese show but mostly entertained questions about the overall state of Chinese society since the 1980's.  So much to say about that - of course! - but, as it pertains to the analogy Ciwt saw/felt between our 60's and their 80's, she was probably right on.  But what has also gone right on are the explosively rapid changes of China - along with the changes here and throughout the world - so, in many ways, the young 60's type energy the young Chinese artists have brought to their works is already nostalgic.  Already freedom has demanded new questions and complications to address.
Posted by Ciwt at 6:25 PM No comments:

Here's what you don't want to be: ....Famous.  Winehouse didn't; it never touched her and felt like a foreign presence to her even as she was one of the most famous people in the world.

Amy is an inescapably sad experience made almost entirely from original archival footage. Ciwt is glad she went.  For one, Amy is very masterfully made constructing a full life from the footage.  But, more importantly, Ciwt was out of the Winehouse loop while she was alive and really only 'knew' her from the glaring, merciless headlines of her final years.  From those Ciwt chalked up Amy as an addled, self-destructive, attention-craving pop star druggie.

It wasn't until she saw the Tony Bennett documentary (The Zen of Bennett - CIWT 302) that Ciwt encountered the extraordinary, jaw-dropping talent that Winehouse was.  Just a Jewish girl from London with the soul and innate musical depth of the greatest of the jazz greats - Billie, Sarah for two.  Ciwt was stunned and guilty for having written off Winehouse based on the papparazzi without investigating what she and her music were actually about.  So now Ciwt feels appreciative for the opportunity to rectify that shallowness and spend a few illuminating, ultimately sad hours with that powerful voice, fierce genius and vulnerable soul.

As the fame (with its attendant reprehensible users - particularly her father), drugs and diseases play out, the documentary is harrowing and hateful.  But then there come the early clips and close ups again, that marvelous, raw energy and talent. And Ciwt returned to why she came. Somebody once said - and Ciwt thinks it's perfect here - This is what music looks like when it becomes a person.

Walk: Driving Day
Distance: 6 blocks or so and home yoga 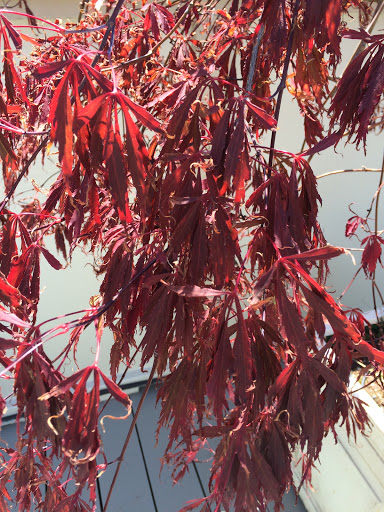 "Oh, it's crisping," said the nursery worker with a smile.  "Is that normal at this time of year?" Ciwt asked anxiously.  "Let's see; we're in July.  Yes, that would be normal."  So with a whew Ciwt clicked off her iphone with its picture of her pet tree's dry leaves.

No matter how long she lives in Northern California it seems she will be forever surprised by its seasons.  By the fact some of our trees and grasses can be brown or rust and well into Fall by July while annuals like petunias and zinnias are on summer track with their equals back east. 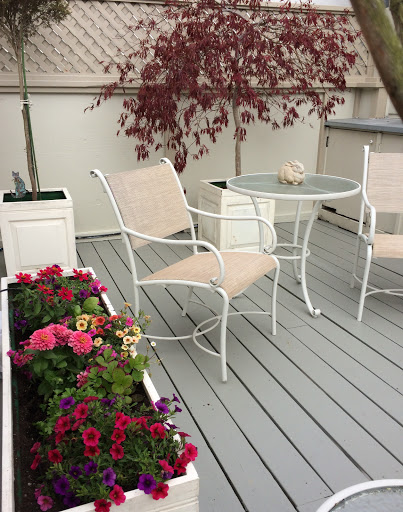 Then she gets surprised all over again around late November when she looks at the Marin hillsides and sees they are bright green with new 'spring' grass.
Posted by Ciwt at 6:22 PM No comments:

Ciwt doesn't pay that much attention to the Asian Art Museum even though she's a member.  But today she decided to pay a visit AND stumbled on one of the best art shows she has seen in the Bay Area for a long, long time.  Two actually .
No, make that Three  with the mini Yoong Bae show.

Very blown away.  She'll return to the Asian and CIWT for more.