As if Ciwt didn't already love Matisse!  Now to see he adored the company of his cats. (He was also an intensely private individual which Ciwt also loves).  His last beloved cats were Minouche (in the middle photo) and Coussi (top photo).  Ciwt isn't sure who the bottom cat is; maybe one of Picasso's who, contrary to common understanding, was a close friend and frequent visitor of Matisse's.
Posted by Ciwt at 5:45 PM No comments:


Then there is the matter of Matisse's iconic Blue Nudes a series of gouache decoupees executed in 1952. What could Ciwt add to the canon on them? First, let us just look. Matisse painting some cut out papers with his seemingly endlessly colored gouache pigments.

The  gouache decoupees opened new artistic possibilities for the aging and infirm Matisse who was largely confined to wheelchair or bed.  Matisse said of the technique "it allows me to draw in colour.  It is a simplication for me.  Instead of drawing outline and putting the colour inside it - the one modifying the other - I draw straight into the color." (quoted in Amis de l'art, October 1951).
Posted by Ciwt at 6:29 PM No comments:

Walk:  Round and round the condo, moving art pieces here and there and back again, and here and                 there again
Distance: ? and home yoga practice

For Matisse there was no distinction between home and studio. In his last years especially he virtually lived inside his work dissolving snip by snip the difference between himself and it.  No outlines, just color and form originating in and returning to pure energy.

This Matisse studio room (with him in the center background) @1951 is Ciwt's idea of a place she too could live.

These small collages at the beginning of the Matisse/MoMA cut outs show were stunning to Ciwt because it was the first time she encountered the many layers and textures of the cut outs.  No picture can show this including the one above.  In person you can see the rough edges of the figures, the brush strokes on the painted paper, the way the cut outs have been laid on top of each other, probably moved around.  In other words, Matisse's artistic presence is very visible.  After decades of seeing pictures, postcards, posters, even the actual Matisse books, the aliveness of the actual works was electrifying.

If you look closely at the cutouts on the wall of his Paris (?) studio, you can see the shapes popping off the paper and get a sense of the craft and workmanship present.

Of all the joyous and free cut outs at the Matisse/MoMA show, Ciwt had a few favorites which she will present.  The first (one of the last in the show) is The Parakeet and the Mermaid (with Venus, Blue Nude II, and Standing Blue Nude inserted), 1952.  It is close to 12 feet by 26 feet 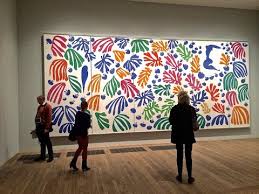 , and happy and enchanting as it is, there is poignancy here.  By the time he created it, Matisse - who always loved his gardens - was too physically compromised by painful health to go outside in any of the gardens around his Cote d'Azur homes (Nice and Vence).  So he created this garden for himself by painting white paper with brightly colored gouache (or directing his assistants to do so), then cutting them freehand into these lyrical life forms and directed the able bodied assistants to pin the cut outs to the wall, manipulating them in space continually until they felt right to him.  Because they were loosely pinned, the shapes fluttered like leaves or flowers -  or the parakeet with which Matisse identified.

Even in this huge work with so much open white space and simple forms, there is a sense of intimacy and personality and earthly as well as ethereal energy that softly emanates and encloses the viewer and then keeps sweetly traveling into infinity.

Below is Matisse deftly working his scissors for the Mermaid that filled one wall then went around the corners and eventually contained the space truly creating an Eden.