Back from NYC.  Because the Cut Outs Show was expected/the main reason for Ciwt's trip, the surprise art highlights turned out to be 1. Egon Schiele  *
(Austrian, 1890-1918)  Ciwt has seen examples of his work in various art history books over the years but very few of his actual paintings and drawings.  For whatever reason (partly that the 'pornographic' aspect of much of his art was considered scandalous and also kept private by its collectors), he is rarely shown in the U.S. (or anywhere?).  And most likely not in the quantity of this show.  Ie, it was Major, which Ciwt didn't click on until she got there.  A Very rare opportunity indeed.

And, then at the same venue, different floor, she decided she should look around the the museum's permanent collection devoted to early 20th century German and Austrian art and design*** (one of her most favorite art eras).  So she casually walked round a corner into the main gallery and encountered - face to face - 2. the ActualWoman in Gold, Portrait of Adele Bloch-Bauer 1.  You know, the portrait you've seen for years on postcards, posters, book covers, greeting cards, and now Ciwt sees in an upcoming movie.  That portrait 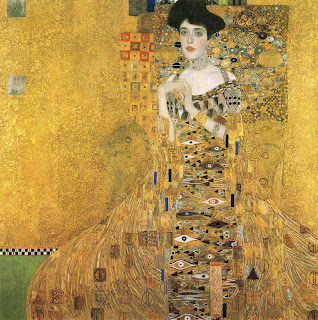 . **
That portrait which Ciwt had no idea was in New York much less in the collection of Gallerie Neue, which was three feet in front of her, and which is so much more delicately, opulently stunning in person than any reproduction could capture.