Walk: Union Square, AMC Metreon Theater (If Beale Street Could Talk)
Distance: 2.5 miles
As if we film buffs didn't know it, Barry Jenkins is an excellent and important film maker for our era.
The young director/screnwriter (he's only 39) was nominated for numerous awards for his first feature film, Medicine for Melancholy (2008).  Then his next and second film, Moonlight, won the Academy Award for Best Picture (among a host of other awards).  Now here comes his third film, If Beale Street Could Talk adapted and directed by Jenkins from the novel by James Baldwin.

Taking on the brilliant, incisive, consummately eloquent Baldwin is daunting stuff for any artist in any field.  And Jenkins is totally up to the task.  His If Beale Street Could Talk is graced with  screenplay, cast, cinematography and music (among other attributes) that would surely meet Baldwin's exacting standards because they meet Jenkins'. Perhaps a bit slow and portentous at times, but, so what?; Baldwin himself was sometimes thought to be overbearing or overlong on a point. So Jenkins aligns with the best perhaps honoring Baldwin by adopting his techinque. 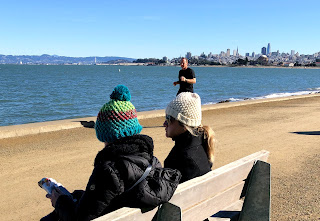 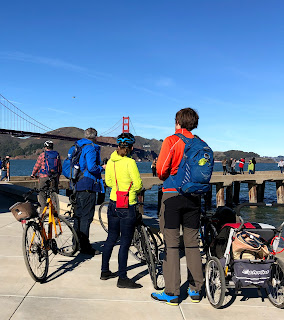 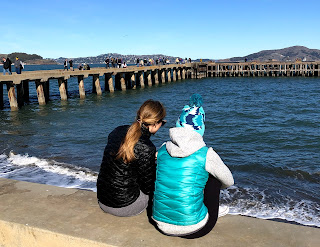 Ciwt enjoys seeing all the visitors to San Francisco during the holiday season.  How does she know they are visiting?  Some ask her to take their picture with the Golden Gate Bridge in the background and others wear COLORS instead of San Francisco/City black. 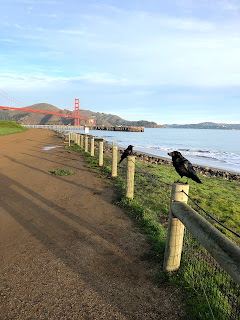 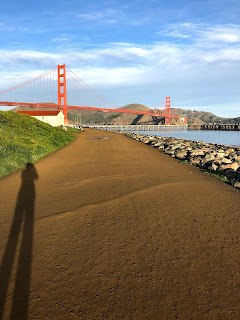 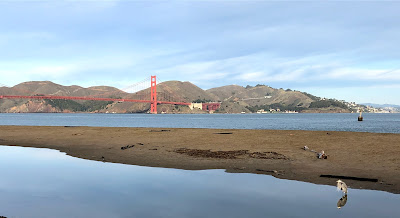 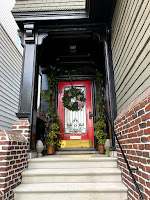 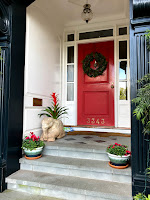 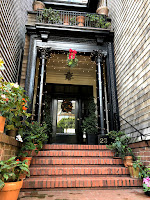 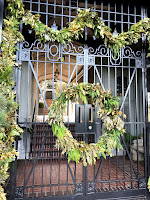 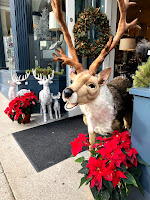 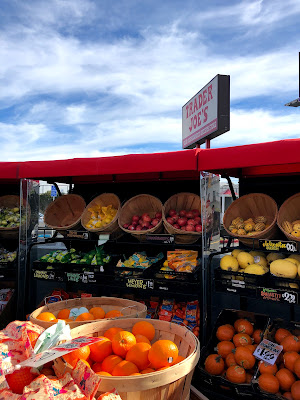 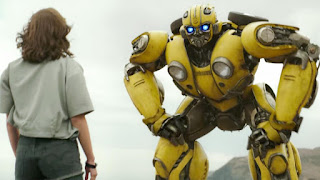 Hailee Steinfeld and B24 in Bumblebee

It's just so different.  The movies Ciwt watched as a teen and the ones kids, teens and young adults will have in their memories.  For Ciwt, the ultimate in scary was Psycho (still is), a highly intelligent, intimate, character study in a small town setting. It revolved around an adult tracking the murderer, or ender, of a few people.  For kids today, many of their movies (like Bumblebee today) revolve around the end of the world, deaths are by the score otherworldly, flamboyant, impersonal, often by robots - and the tracker/savior is a kid.  Adults are basically pathetic but usually at the end, the savior kids are willing to put up with them more agreeably than they did at the beginning.  And the e.t. robots are vanquished - temporarily.

Just a completely different sensibility - the kid in Ciwt and kids today.  In many ways Ciwt finds this pretty awesome, the way the world has changed in her lifetime. Go (and Godspeed) kids!!

Nobody, not even Ciwt, could hibernate through the new Spider-Man movie.  It has New York energy and scenes on steroids, animation a modern art gallerist would kill for, a plot that surely drives Spider-Man, Marvel, computer game and animation lovers up a wall (in a great way).  For lay people like Ciwt it was a pretty comprehensible, very fresh visual wonder - and she loved that New York is almost as big a star as Spidey himself.   (er, themselves...) 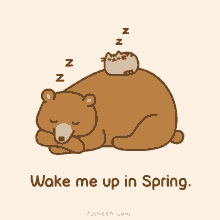 Ciwt finds it challenging to write when she is hibernating.
Posted by Ciwt at 5:49 PM No comments: 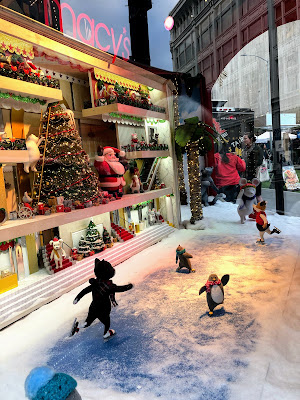 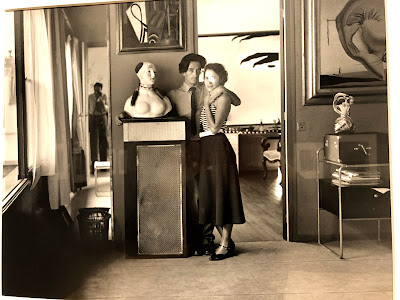 Ciwt was interested to see these portraits of Salvador Dali looking so 'normal.'

They are part of the captivating and comprehensive Brassai show at SFMOMA.  Brassai (born Gyyla Halasz in Hungary) is one of the most prominent figures of twentieth century photography, best known for his provocative and enigmatic images of Parisian life between the two world wars and for powerful portraits of his avante-garde friends -Picasso, Matisse, Henry Miller and Salvador Dali among them. If you look to the left at the bottom photograph you can see Brassai at work in the mirror.

Is "nice" a compliment?  Ciwt means it as one in reference to the bio-film Stan and Ollie which will be in theaters in time to make the holidays more agreeable and sweet.  (Are those compimentary adjectives?)  Many grins and good feelings ahead if you go.
Posted by Ciwt at 2:49 PM No comments: 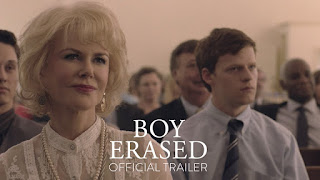 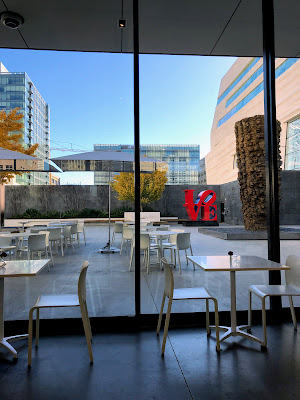 When Ciwt goes to SFMOMA she often stops for a bowl of daily fresh soup at Cafe 5.  Light, airy, comfortable for museum goers - and pigeons that walk in from the sculpture garden heads a bobble.
Most Cafe 5 diners find them charming, but the occasional person runs from the cafe upon seeing them.  Very freestyle is Cafe 5. 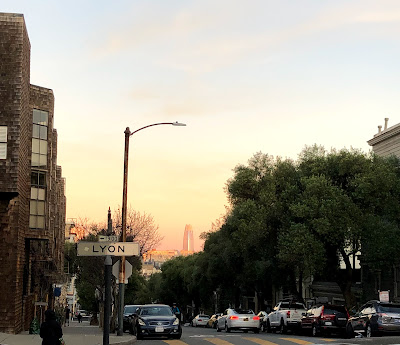 The enormous Salesforce Tower was quite the soft, ethereal spectacle from Lyon Street this late winter evening.  It is usually Ciwt's least favorite new addition to San Francisco's rapidly growing skyline, but tonight she found it lovely, even hopeful.
Posted by Ciwt at 6:10 PM No comments: 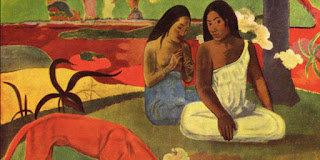 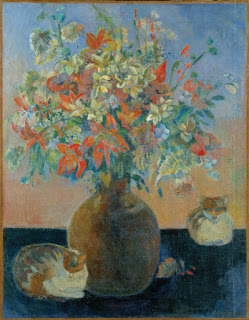 Nor in connection with Gauguin does she think of wood carvings or experimental ceramics.  But they are all there in the de Young's current - and first - Gauguin show running through early April 2019.  In some ways Ciwt found the show disappointing because the Gauguin we all know is only present in a few works. But in other ways presenting Gauguin in a more contemporary and expanded light was stimulating and thought-provoking which is no small feat with famous artists.
Posted by Ciwt at 6:24 PM No comments:

Ciwt was looking forward to giving art tours for the next three days.  But today she got three cancellations instead. (All by one organization).

Luckily they weren't the type of cancellations pictured above.  Those are British North Borneo stamps from 1889.  Very valuable, particularly cancelled ones which can 'prove' their legitimacy.  Except when the cancellation bars are fakes!  Turns out only the middle stamp above is good; the other two are fakes.

Ciwt joins other family members in not being able to carry a tune.  When by some fluke she made the high school choir, her friends voted her president because they thought it was such a joke. Thankfully for all concerned, Ciwt declined the position as well as her place in the choir.

But she's always admired those with good voices and the opportunities that gift opens - being a qualified member of a choir for one. By chance, a church just down the block from Ciwt has one of the most admired music programs in San Francisco, so Ciwt can walk to their concerts throughout the year.

Of course, there are Numerous ones during the holiday season.  Gorgeous to listen to but also extensive and exacting enough to make tone deaf Ciwt secretly relieved all she has to do is walk down the block and listen.  The choir members themselves, - those volunteer, chruch members with beautiful voices - commit hour after hour, day after day, week after week to learning words (often in ancient or foreign languages), rehearsing, rehearsing, rehearsing. 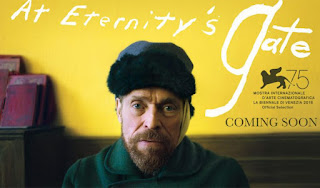 A movie art and/or Willem DaFoe lovers will appreciate. 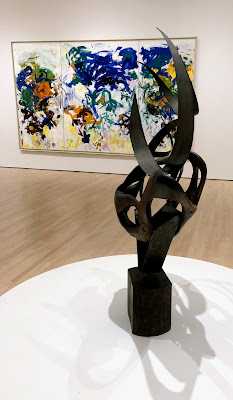 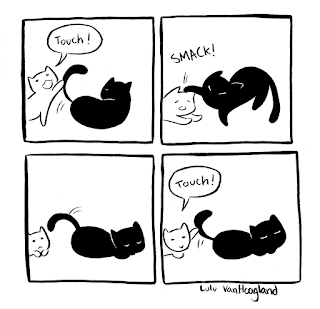 Ciwt is just not in the mood to write tonight.... 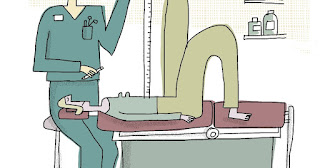 Getting older is sneaky business.  All of a sudden things appear.  Like shin splints.  Yogini Ciwt knows this but keeps forgetting about not consulting the internet - and checking things out at least initially with professionals in the simpler - and sometimes magical - modalities.
Posted by Ciwt at 6:08 PM No comments: 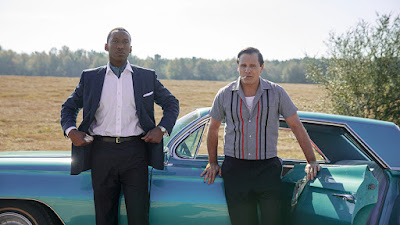 So, Ciwt went to Green Book with low expectations except about one of her favorites, poet/actor/multilinguist/brilliant/dreamboat Viggo Mortensen.  Imagine her disappointment when the
movie opened to maybe 15 minutes of Mortensen as a 1. chow hound, 2. smoker, 3. heavy, 4. virtually illiterate, 5. ill mannered, 6. the list goes on to a few more non-Viggo qualities.

"This movie will be terrible," Ciwt thought.  Then lean, elegant Marershala Ali glided onto the screen and sat on a splendid throne.  The two leads began playing their 'buddy' roles together, and it all worked with terrific energy and just enough historical fact to inform but not either overwhelm or sugar coat. 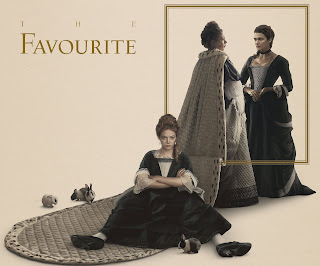 Longtime CIWT readers  might remember Ciwt's ancestors came over from England on the ship Griffin in 1633.  That's 15 years after the Mayflower, and something Ciwt herself didn't remember until she consulted notes.  After that, English marriage after English marriage ensued until Ciwt was born - and after that even.

So maybe her dna explains why she never completely enjoys plays, books or movies that mishandle presenting the peculiarities of the English. To be sure there are many of those but comparatively few and superb are the artists who get it right. Monty Python, Oscar Wilde, Dame Edna,  Emma Thompson as well as many notable others come to mind.  And what they usually have in common is their Englishness.  Or, okay, Irishness, or Great Isleness.

When non-English artists go at the bad teeth, thin hair, strange relationship with pets, dark wooden everything,huge estates, non-stop tapestries general daffiness, part of Ciwt cringes.  Unsually this isn't done with love.  And, in spite of its many commendable qualities such as superb acting, Ciwt felt such was the case with The Favourite.  But, Ciwt is, you know, pretty thin-skinned about such matters, so please go and judge for yourself. 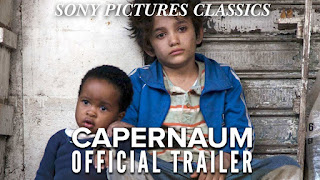 What can Ciwt say about an assured, technically excellent movie that is hard to take? Well...if you are looking for 2 hours* of unmitigated Lebanese hardship and despair - very well acted, filmed, scored and Cannes Grand Jury-winning - Capernaum is for you.  And/or, if you are in need of a good cry; Ciwt believes the tough looking man next to her at Cinema Club this morning was sobbing at the end.

Walk: No, healing shin splints
Distance: 0, but nice to just read with cats on lap


Among the many things Ciwt admires about Henri Matisse is his courage to grow as an artist until the very end of his life.  One of his most dramatic periods of growth came when he visited then stayed extensively in the South of France. Having grown up in Northern France not far from Belgium Matisse had never seen such light.  It affected him deeply and seems to have transformed his sensibilities and art forever.  Pictures are worth 1,000 words they say, and here they are above.  The first is painted in his original palette based on the dark light in the north. The bottom paintings tell us all we need to know about his later and continual love affair with light and color.