Thinking more about Anders Zorn and why I can't write about him with more excitement.  From what I've read, he was a born artist, displaying superb skills from early childhood, producing exquisite pencil portraits of his classmates and landscapes of his farm village. Though he was under intense economic pressure and had to rely on the 'kindness of Stockholm virtual strangers' to do so, Zorn didn't rely on native gifts but pursued Stockholm Academy studies and at the same time taught his farmboy self to dress properly and move among the 'good society' he had to adapt to.  And where the young prodigy was well received and had almost immediate opportunities to earn a good source of income from portraiture commissions and illustrations for magazines.* (*He was not so well received a the Academy because his skills were far ahead of their training.  Telling him after his first year he must either follow their curriculum or leave, Zorn chose the later and began 10 years of travel to encounter other cultures, art styles and collectors).

In my first entry about him, I was critical of the fact that he seemed to paint 'to sell.'  Why wouldn't he I now ask?  He became wildly financially successful, moving among the very wealthiest circles wherever he went. Usually having his introductions before actually moving or visiting, he was superbly methodical, and when he arrived he dressed beautifully and was known to be delightful and charming as well as elegant.  His first 'big move' was to London, and he courageously invested almost all his money on several Seville Row suits even before meeting his contacts so that he would create the best impression and be immediately accepted.

In all this upward mobility there was no sacrifice of art or craft. He was very versatile working in watercolor, oils, etching and woodwork sculpture, and -especially until around 1900- he was continually striving to perfect all these artistic mediums. 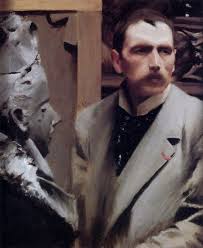 From his early grounding in natural talent, hard artistic work and assiduous (sometimes personally humiliating) focus on agreeable cosmopolitan polish, he rose to a level of prominence and artistic merit quite above most people's (certainly ciwt's) understanding.  His brother-in-law called him "a hybrid between a peasant and a gentleman." He was beyond international, living in such places as: the English countryside, London, Paris, Madrid, Toledo, Sevilla, Cadiz, Rome and other points Italian, Constantinople, Algeria, Switzerland.  All these and more before coming to America, meeting one of the queens of the American Gilded Age, Isabella Stewart Gardner, and, through her and other prominent contacts, being introduced and painting portraits of the elite in cities such as Boston and Chicago, as well as three U.S. Presidents.  Relentlessly networking, he was welcomed and entertained on yachts, country estates, the finest dining rooms, palaces.  The Gilded People of the fin-de-siecle could not get enough of him or his work, and he became an international celebrity artist and very, very rich.  Larger than life, 'a force of nature,' absolutely authentic, many descriptions apply.

But, chameleon-like, he regularly retreated to the Swedish countryside where he was born the illegitimate and unclaimed son of a brewer, and finally moved there exclusively where he continued to paint as well as collect art, extensively remodel his home, yacht and generally participate in Swedish rural life. 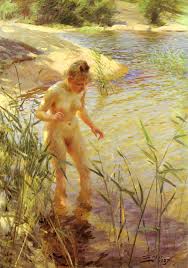 His work was and is Beloved! by many all over the world, of course especially in Sweden.  Few Americans have even seen his work until the recent U.S. shows in Boston and San Francisco.

So, again, I ask myself why I can't write about him with more excitement.  His work is consistently utterly pleasing and superior.  It isn't psychological which I tend to like.  There's something oddly furtive about a lot of his nudes, but this comes in on me as a bit disturbing rather than psychological. I don't sense the spiritual or the soulful.  I don't see innovation, avant-garde, anything forward-looking or cutting edge.  Does this matter?

I also haven't seen his work before so he doesn't benefit from the familiarity that leads to bonding. He's every bit the watercolorist Winslow Homer is- maybe better.  But I've seen Homer and I know Homer's American subjects: the sea, the Civil War, 'our' woods. If I were not American and walked into a Homer show for the first time, how would I respond?

I'll go to the Anders Zorn show again.  Maybe not write about him any more.  For those of you who will not be attending the Legion show, here are some informative (and beautiful links).  Enjoy. 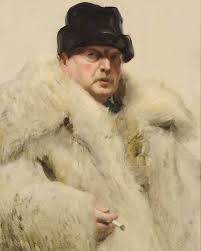