Today's Docent Lecture was on the love of my artistic life, Henri Matisse.  Perhaps more later, but one little tidbit I found fun and interesting concerned that masterpiece of shock Matisse painted and presented in Paris in 1905, The Woman in the Hat.  He was strongly discouraged from hanging the oil by the Salon d'Automne judges, but he went ahead - to one of the wildest receptions of any painting in the history of art.  People spat on it, clawed it with their fingernails and the critics were repulsed, likening all the paintings in the show, and particularly this one, to wild beasts.  Or Fauves as the short lived, intensely colorful movement was called from then on.  (See CIWT 344 for Henri Derain, one of Matisse's fellow fauve artists).

But back to the tidbit.  I had always assumed the hat on Mrs. Matisse's head was a figment of Matisse's imagination, a free-form thing he invented.  But today I learned that 1. Amelie Matisse was a milliner and 2. such gargantuan and outrageous chapeaux were in fact at the height of style in Paris at the time. 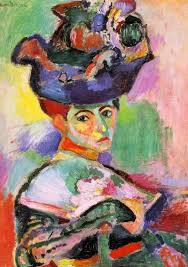 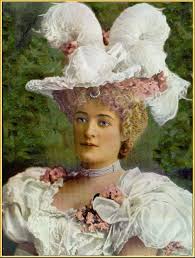