The de Young's Hockney exhibition is so massive and sprawling, so varied in mediums (paints, charcoal, pencil, photos, videos, other electronics) it requires time to assimilate.  So, ciwt has been taking it in pieces.  Today's piece concerns this volume of art and whether or not it contributes to our understanding and appreciation of Hockney. In a word, is more less?

My art friend said that which was so obvious I forgot to frame the thought: just one painting would have been enough. This was her comment after we had finally torn ourselves away from the first room of enormous, compelling, exciting, beautiful, amazing, etc. paintings of trees and meadows in Hockney's beloved English countryside. 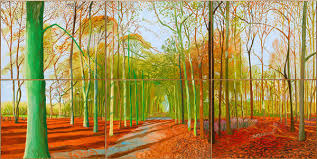 We had stood in the room wowed and admiring talking about how, at first glance, the canvases called to you with their clear, pleasing Matisse-like colors and then began to deepen and deepen, pulling you in, moving your eyes around until the colors began to register as the true colors of nature and the viewing experience had become like a meditative, grounding walk in the woods. This is Hockney's magic, and it is wonderful.

But there was an almost a guilty letdown when we walked into the next room and saw it was more of the same.  Huge, intense, beautiful portrayals of the English woods.  And then there was another room of them.

You just can't hang on to the awe.  It dissipates even in spite of the fact that all the works are of the highest quality.  One after another they lose their clout.  You have to kind of work to stay deeply interested and give Hockney the admiration he is due.  Finally, you get a little bored.

It's too bad.  As my friend said, one would have been enough. Maybe one room.  Then you would have walked away thrilled and wanting more.  Eager for your next encounter sometime, somewhere with a Hockney.

I don't know what is behind the decision to display so many works.  Besides the paintings, there are numerous videos, at least four rooms altogether of  portraits 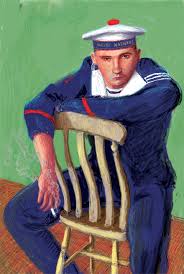 , a faraway hallway of joiners, 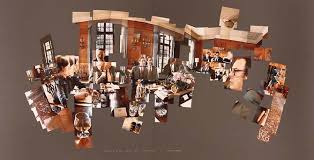 several rooms of iphone and ipad drawings - but without the gadgets themselves so you couldn't see how they looked as initially drawn on the small screens.

Then there was the part of the show mentioned yesterday that concerned Claude's Sermon on the Mount.  Whatever the subject or theme, it was there in abundance.  Particularly with the technological art, multiple questions came to mind - how was it produced? why didn't it lose resolution when blown up? how was it printed on such huge piece of paper? and countless more.  But there were no explanations.

Another decision that I believe caused the show to sprawl without necessarily maintaining interest was mounting it according to chronology.  Chronologically in the very short period covered, Hockney did watercolors of people, then a series of portraits in watercolor, then he began watercolor landscapes.  These morphed into painted landscapes which grew in size.  Then he experimented with videos to see if they would better capture reality (His true muse).  Nope, now back to bigger paintings, then the iphone, ipad, Claude, a whole other series of portraits 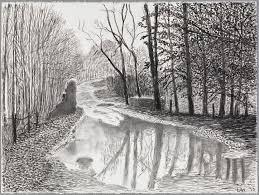 - as well as a few other asides each of which represents a whole other thought process on Hockney's part.

I wonder if there had just been one+ room(s) of portraits, others of landscapes, then videos, etc.  Would the show have more power that way? You could concentrate more on the art instead of being sidetracked by "wha?  why portraits again?  And what are these charcoals?"  You were kept questioning why you were looking at what you were looking at.

All that said, I've been to the show three times now and will go again.  It is a privilege to have it here and to be able to spend so much time with Hockney's art.  Especially I will go for that incredible hit of leaving the show, walking out into Golden Gate Park and realizing it looks Exactly like Hockney's paintings!  Without you really knowing it, he captured, totally captured the outdoors.  He captured reality, his muse.