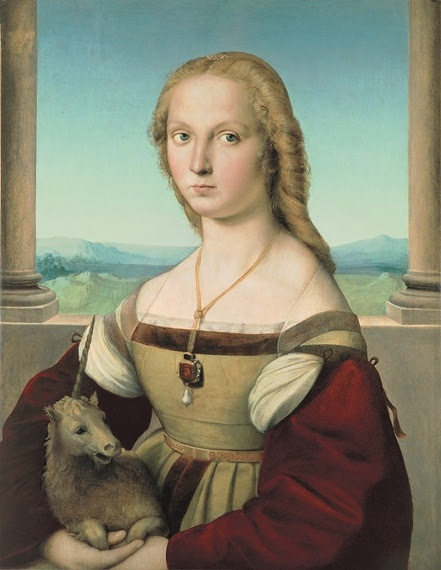 First, after years of negotiations this exquisite painting was allowed out of Italy for the first time since it entered Rome's Galleria Borghese collection in 1682.  It was painted by Raphael, considered one of the three greatest Renaissance artists (along with da Vinci and Michelangelo) when he was just 22 years old.  Lady with a Unicorn is considered a treasure on a par with the Mona Lisa, and she comes with a complicated and mysterious past. She's right here in San Francisco at the Legion until April 10 where she has attracted many admirers as well as scholars hoping to finally resolve her mysteries.

And then in Southern California, the Highway Patrol was getting calls about a unicorn loose on the highways. At first they thought it was a prank, but it turned out to be marvelously true. And because the Highway Patrol is sort of rusty on capturing unicorns, she eluded them for three hours and finally had to be captured by a maiden on a horse. (Don't believe it?  Click on the underlined area)

About all this unicorn, Ciwt says Good; you can't get enough unicorns!!