Walk: Legion of Honor (Bonnard show)
Distance: A Few Blocks (but museum floors can be brutal on feet), small yoga 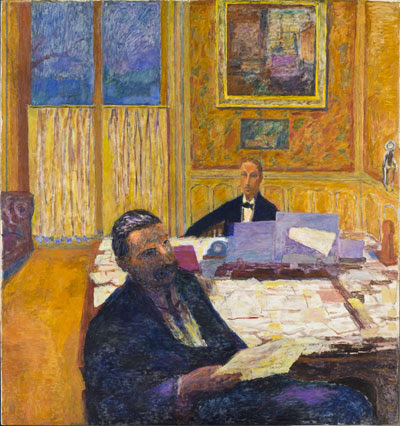 Pierre Bonnard, Portrait of the Bernheim Brothers, 1920 Oil on canvas

Here are Bonnard's dealer/'friends.' They are twins but Ciwt was interested that one twin is painted prominently with detail about his looks whereas his brother in the rear looks a bit like a diminutive wooden dummy. Then she saw another of Bonnard's paintings of the brothers - actually commissioned by them for the home they shared.  Look what has happened to that 'dummy' brother in this one!  Ciwt can't help but wonder what Bonnard was up to; whether he had some unspoken problems with this brother. Bonnard was always the psychologist often interested in estranged intimacy and the secrets and hidden things that surrounds it.
Posted by Ciwt at 5:51 PM