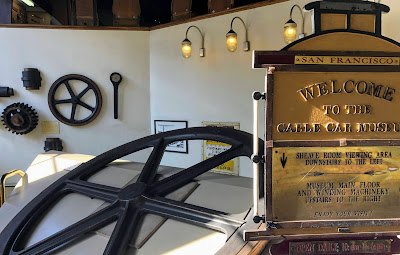 Maybe because she did it right in the middle of her annual Halloween Contest, Ciwt forgot to tell you she finally stopped into San Francisco's Cable Car Museum.  Thanks to having discovered a long lost (and buried) cable car line just a block up the hill from her home.  (See CIWT Days 10/194 and 10/195). (The ways San Francisco keeps surprising, stimulating and entertaining Ciwt after over the 50 years of living here is always a delight). 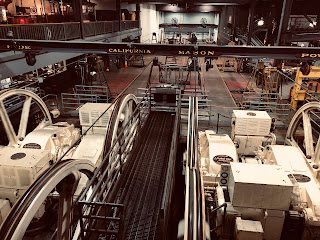 Like everyone most days of the week, she just walked right in - absolutely free.  The surprise was finding not just a museum but a fully functioning powerhouse for the entire rail line.  Visitors go downstairs and are below the San Franicsco streets looking directly at the huge spindle pulleys, called 'sheaves' loudly at work pulling the cars up and down the hills.

They have been doing this night and day since 1873 when inventor Andrew Smith Hallidie's way of using wire rope cables to drag wooden trams up and down our steep, fog-slippery streets became operational (and spared horses).  These gigantic clock-like gears are part of San Francisco's infrastructure transporting people and lending San Francisco part of its fabled character to this day.

Yes, cable cars continue to climb 'halfway to the stars 𝅘𝅥𝅱𝅘𝅥𝅱."  They are a traveling piece of history, in a way the heartbeat of our city.  There are four lines operating, down from the original and more extensive 8 lines.  But these four are now protected by the City Charter so they won't be going anywhere - except slowly up and down our hills with bells clanging and tourists and local commuters alike hanging onto straps, talking with the conductor, and becoming a moving part of San Francisco.