So, Ciwt has been wondering for years where Hillary Clinton gets her bright colored, high quality travelling pants suits..

And then came Gwen Ifill 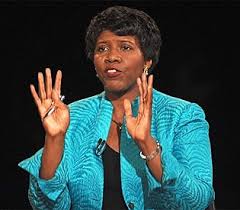 Janet Yellen, Elana Kagan and a host more political and executive women.  Turns out they are all wearing Nina (pronounced Nine-ah) McLenore, a 70-year old designer who launched her label in 2001* and has a great story: She grew up in Mississippi where her mother made her clothes and she learned to sew but studied economics in college.  Her fashion business training was intense working through executive jobs at Liz Claiborne and helping develop early professional-apparel lines like Dana Buchman.  Then enough with clothes already, she earned an MBA at Columbia, worked for several years in private equity, then retired.

Which gave her time to really hear her professional women friends complain about the difficulties of finding appropriate clothing.   The options were often ill-fitting, poor fabric, limited, drab color, too expensive - which McLenore confirmed for herself when she posed as an investment banker and scoured Madison Avenue.

The rest became history - which Ciwt just caught up with today when she visited the McLenore store in San Francisco (which has been here for 9 years).  Wonderful!! fabrics, essentially impossible to wrinkle and excellent basic cuts in, yes, a rainbow of colors and moderately affordable/mid-range expensive.

If Ciwt had a political-executive lifestyle she would seriously consider wearing McLenore.  (And if Nina cut quite a bit smaller and toned down some of those colors).  Ciwt thinks the line particularly becomes Hillary.

*(About then, Ciwt - always interested in fashion - began teaching yoga and was far, far removed from such clothes).