Walk: Would you believe SFMOMA plus Union Square for hair
Distance: 3.5 miles and home yoga 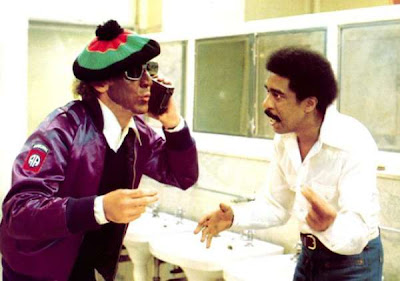 Ciwt still laughs out loud remembering the bathroom scene from Silver Streak.  Thanks Gene and Richard.

She likes the realness of Richard Pryor's daughter, Rain, when commenting on Wilder's death today:

"[Wilder] was a very caring human being, but I know that he didn't hang out with dad a lot because they just didn't — my dad was different," Pryor elaborated. "They were different in natures. Mr. Wilder was the older 'I'm here. I'm doing my work and we have a great chemistry. And then I'm going to go have my sober life.' He was a normal dude compared to my dad in that sense. But in terms of his kindness and generosity and to watch the two of them together, there's not a magic that's been like that in a long time."

Her father thought the world of Wilder and made the same comment about his screen buddy all the time, she said.
"[Richard] thought he was amazing," Pryor said. "He thought them together was amazing. He always said, 'That man's a genius, and he's a good man, that's for sure.' I always heard him say, 'He's a good man.'"
Posted by Ciwt at 4:49 PM