As we all know, everyday happenings are now major events, so Ciwt felt very adventurous when she got onto the 1 California bus and rode part way (she walked the rest of course) to the de Young Museum's Frida Kahlo show.

It was hung in early March and had already been sold out so anticipation was high for huge attendance and rave critical reviews.  And then.... the doors were closed for six months and nobody got a single glance at it except the security guards and a few museum personnel.  Until yesterday when the doors reopened.

Once again the show is sold out, but this time to a very limited number of visitors with restrictive advance reservations, masked and standing 6 feet apart.  Well,  the best laid plans.....Six feet apart as they waited to go in as you can see above.  But, the show itself has many cramped alcoves with small pictures where there is no way you could keep that 6' distance even if you tried.  And, predictably,  many visitors got caught up in the photographs and jewelry and talking to their friends through masks, and forgot to try.

Ciwt walked right on by those tiny alcoves and pictures and letter scraps and whatever was in them.  She'll buy the book or something and read it in health at home.  But luckily there were several wide open stretches which upended Ciwt's understanding of Kahlo.  One of them was a huge wall with a 1941 home movie of Frida and Diego Rivera.  As is well known, Rivera was her husband and international sensation and saga in and of himself.  In most portrayals - paintings, photographs, news clips - he towers over or beside her and is the focus, the star. Frida looks tiny and more or less simply decorative. 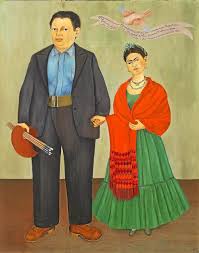 But not so in the show's movie - not at all.  It is a real life reversal of sorts.  She is still tiny and decorative but clearly a powerful woman in her own right and very much Rivera's equal.  He doesn't have the star swagger and simply sits with her, a middle aged man in wire rim glasses.  He could be a professor at Columbia University or somewhere.  And, whatever they are doing, she is clearly in charge and he clearly admires and is challenged by her.  You could even say he is minding her.

Ciwt may have read in books that Kahlo was a strong person and presence to be reckoned with, but Rivera has gotten so much attention over the years and there has been so much emphasis on Kahlo's illnesses and injuries, it took this short film of them together for Ciwt to grasp how equal they really were, as artists and individuals. 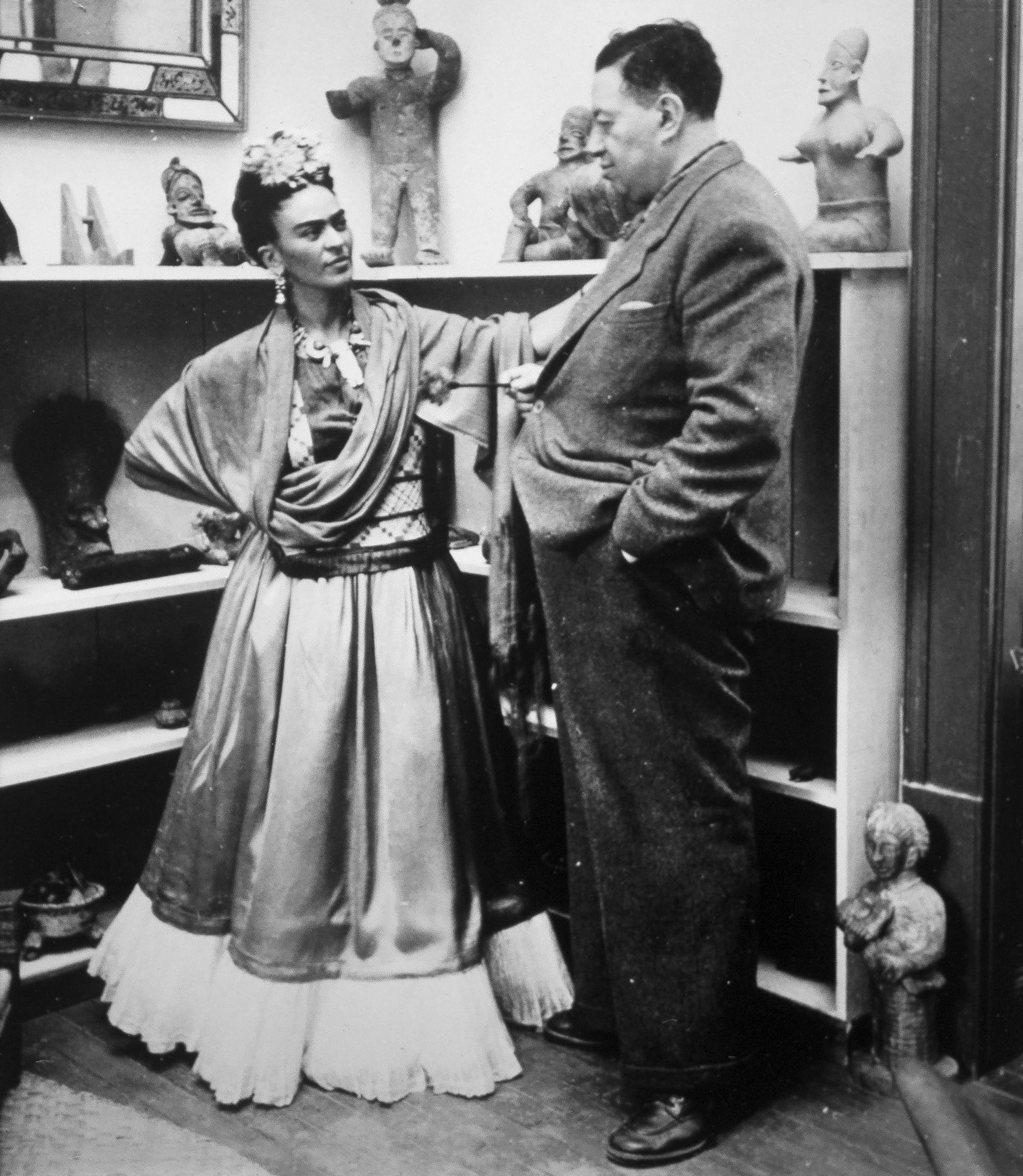 After the movie, the show opened to a large room filled with mannequins dressed in some of  Kahlo's outfits. Costumes really.  If you like fashion - which Ciwt does - seeing these creative and colorful 'authentic' Mexican outfits is a treat.  But the treat is both enhanced and altered by understanding that Kahlo was wearing them not in old timey Mexico but in places like New York City, Paris, San Francisco.  It was the early 20th century; even in Mexico most women had long since stopped dressing ethnically and were wearing the latest styles.  Kahlo would have been a powerful, regal, awesome person walking among them.  Your instinct would have been to stand back in admiration. It is a rich show, and others may have been struck by different things than Ciwt.  But she bets most of the viewers came away from 'Appearances Can Be Deceiving' feeling the show lifts Frida Kahlo right up and (finally) does her justice as the complex, strong-minded, creative, compelling person she was. Plus it gave Ciwt an opportunity to ride a bus and go to a museum - finally!