Ciwt became so intrigued with her 'What is Drawing' question* that she took herself to a short Fundamentals of Drawing class nearby in the Presidio yesterday.  Until yesterday, she had never quite understood why the most famous artists in the world were required to take years of drawing studies in art academies and/or remain with a master in a workshop for many years until they could move on to noteworthy (ie, collectable) art works such as sculpture and paintings. Well, now she has some glimmer of that answer:  Because drawing is Difficult!  It can be taught to anyone (according to yesterday's instructor), but the demands are many. The basics give you techniques for teaching your fingertips to see.  But then there comes the perfecting of those techniques in simple sketches followed by the intense studies of hands, faces, noses, eyes, bodies in movement, etc. which can be intensives in themselves.

Even the little drawing we did in class yesterday put Ciwt in touch with a fascinating phenomenon that happens when you immerse yourself in even attempting to capture a subject with pencil on paper. Enormous focus and energy come to bear - and emotions like fear, respect, appreciation, fascination. Drawing is like entering another world; you even start sort of bonding with your subject and picking up its energy.  Kind of other-worldly, powerful and described so well by Auguste Rodin (1840-1917):

'What is drawing? Not once in describing the shape of the mass did I shift my eyes from the model. Why? Because I wanted to be sure that nothing evaded my grasp of it… My objective is to test to what extent my hands already feel what my eyes see.'
The secret the instructor said is to keep at it; draw a lot, all the time if you can.  Like yoga, just get to your mat.  It is experiential.  And breathe.  The more you can do those things, the greater your chances that your drawing abilities will open to you.  Here is how Camille Pissarro (1831-1903) put it: 'it is only by drawing often, drawing everything, drawing incessantly, that one fine day you discover to your surprise that you have rendered something in its true character. 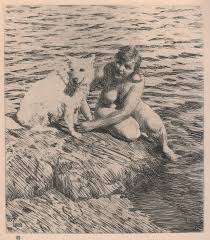 (Sappho) who was essentially born to draw and dropped out of the Royal Academy of Art in Stockholm early into his studies because he felt (correctly) that his skills were already beyond the classes he was required to take.  Same with Konstantin Makovsky***  the renegade Russian realist painter of The Russian Bride's Attire (1889) , and of course the Impressionists. There have been many others who have needed and taken their artistic freedom.

Whether academic or self-taught, Ciwt now comprehends a bit more deeply some of the statements made by artists on drawing.

'By drawing, man has extended his ability to see and comprehend what he sees.'

'In the final analysis, a drawing simply is no longer a drawing, no matter how self-sufficient its execution may be. It is a symbol, and the more profoundly the imaginary lines of projection meet higher dimensions, the better.'

'Drawing is a kind of hypnotism: one looks in such a way at the model, that he comes and takes a seat on the paper.'

Fundamentals and Other Drawing classes by today's teacher: www.johnmuirlaws.com/