Ciwt had one of those only in San Francisco days beginning in Japan (town) strolling through all those inexpensive colorful wares and eateries.  Then on to Hayes Valley to look in wonder at her old working ground (Miller/Brown Gallery) in what was once a remote, fairly dark outpost under a freeway overpass.  Now the freeway has been torn down, and Hayes Valley is filled with trendy/expensive shops, uptown eateries and 'the young.'  Next came New Orleans!  She  had big! East Coast shrimp and listened to jazz at the bar of a New Orleans style restaurant.

Finally it was the world of Haute Couture, specifically the House of Dior with its new head, Raf Simons.  She saw the movie (Dior and I), but it doesn't matter how much Ciwt learns about the haute couture world, to her it is eventually mystical - dependent on the heart, soul and skill of each person who pours their artistry into each piece.

But also an archaic, crazy-making world if you have any head for business.  For instance, Raf Simons  was hired by the most famous couture house in the world just Eight weeks before the Paris Fashion Show where the (non-existent until he creates it) Dior collection will be presented.  Eight weeks to meet the staff 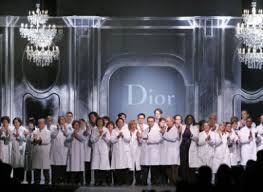 , get familiar with the company and Paris, learn all the idiosyncrasies of both, envision a new, personal spin on an iconic look with the world watching and other completely pressing matters.

At this very time, mostly unannounced to Raf, all the old-timey House of Dior ways are still in place. This leads to situations where he - head of the House, designer being watched by the world, with just a few weeks before the show of shows - comes to a meeting set for the purpose of seeing the first completed samples of the show's dresses.  Only to find out that there is not one dress there on top of which the chief seamstress (incredibly important personage) has flown to New York to meet with a private client.  This being at the fingertips of important clients, he is told, is how Dior does it.  For his part, he tries to carefully, ever so politely explain (the one would think obvious) that, weeks before such an important show, if anyone is to fly off to meet with a client, it should be a subordinate so the main person can continue the work of show preparation.

Ciwt could just sense the room thinking "Yeah, he will learn." (To be fair, Raf's artistic nature also trumped his business sense at various junctures).  By the end of the movie when the new collection hit the Paris runway, Ciwt was in tears for this impossible, supreme accomplishment - along with all the House of Dior peeking behind the curtains and Raf himself 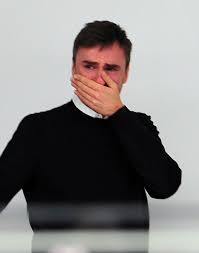 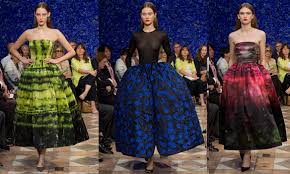