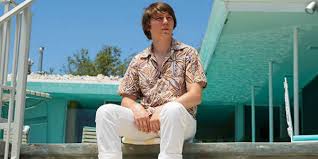 Paul Dano in Love and Mercy


Well, it was a bio-pic, not bio, the movie (Love and Mercy) Ciwt was looking forward to about Brian Wilson.  Forever Ciwt has been reading about his creative genius with all its ramifications from his legendary (under-appreciated for years) music to his extreme difficulties in living.  Finally Ciwt feels she understands and she Very much enjoyed the portrayal of Wilson's genius at work in the recording studios.  Also the real man singing at the end - don't leave the theater before the credits if you go.

But something in the telling fell flat for Ciwt.  Granted there is a flatness to Wilson's demeanor and certainly his story.  Abusive+ father, loss of Beach Boys songbook, disreputable/illegal psychologist/guardian, drugs on his already scrambled brain all add up to various types of imprisonment.  And perhaps the movie was trying to capture and emulate that.  If so, success.  If not, it came across shallow, pat and too bi-bifurcated.  (Every time - and it was often - they flashed from the young, Beach Boys Brian to the older, befuddled 80's Brian, Ciwt had to wrestle with the fact that the actors didn't look the least bit alike.  And with the fact that the older Brian had completely different body language and was was all surface peculiarity with no depth.  (Ditto his Barbie Doll girlfriend, now wife.  Yes, a happy bio-pic ending!) (Paul Dano as the 60's Wilson is very good).

But still there is that Brian Wilson genius and that music.  So, if you like those, Go!  They are totally alive even if the movie (along with the promotional picture) is a bit lifeless.
Posted by Ciwt at 6:06 PM