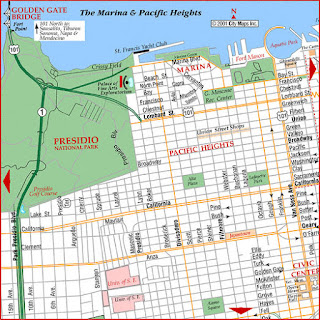 So Ciwt does not want to be one of those predictable geezers who goes on about how much better things used to be in her day.  But as the city she moved to (on and off at the beginning) five (5!) decades ago morphs into its present self there are many disappointments with how it has evolved.  And this has evoked the 'flight or fight" response in Ciwt.

It isn't her nature to occcupy her life fighting city hall even if she knew how to put her thumb in our growth dike.  So flight has won and for several years she has been (vaguely) thinking of moving on.  Reading 'for sale' ads and checking out places on line, that kind of thing.

Today, to get more specific about that place far away with greener grass, she got methodical and made a serious list of what her future place must have. When she was pretty deep into it, it came to her.  OMG the one place that has all the things on her list was.... and she promises you, it really did come as a shock ....the place she lived!  She is already in the best place for her.

But to make it truly perfect for the present Ciwt she must modify her thinking.  1. She needs to stop comparing the city she moved to with the city it is now.  2. She needs to stop lamenting the fact that she can't just dart all over the Bay Area like she and everyone else did 'back in the day.'  Because 3. she needs to realize that over the decades, she has come to make a certain part of the city and the Bay Area her own: her particular, totally walkable hood; close by downtown - sometimes on foot, sometimes on wheels; that 1,200 acre backyard called the Presidio; her proximity to the Golden Gate Bridge and Marin.  Those are the only places she actually goes to and enjoys on a daily basis.  So, no Boo-Hoo about the East Bay, Peninsula and other parts of the Bay Area that are difficult to get to now.  She hardly ever went to them ever.  4. Same goes for the highrise 'new' South of Market city, the techies, the desperate homeless problem, gridlock.  These are not her parts of the city.

She also got that it's perfectly appropriate to settle on this narrower stance because she is older now.  She can do little helpful things here and there if they arise, but, really, the future (of her city) is in the hands of younger generations. Over the years she has created exactly the right place for her at her  age now. This is Home.  Who knew?