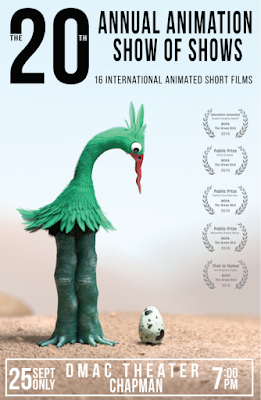 Luckily a small, old-timey neighborhood theater near Ciwt is one of the venues for the Annual Animation Show of Shows.  This compliation of animated shorts is the love child of this man:

Ron Diamond who has curated, produced, promoted and accompanied his baby to each college campus, theater, basement theater and everywhere his Show of Shows is shown.  He was there today talking about watching 1,200 shorts and culling them to the 16 in this year's group.  During the past 20 years, 38 of his choices have been nominated for Academy Awards and something like 13 have won Oscars.  But winning awards is not what Diamond is all about; his mission is bringing the labor, love, and talent of the intensive art of animation to people's awareness and doing whatever he can to encourage young people dreaming of being in the field themselves - or making just one short.

It is always a bittersweet adventure for Ciwt.  Sweet because it is such a treat to see animation from all over the world - particularly at such a high level.  But bitter because each film takes innumerable hours - for one film this year, the director hand drew each frame for ten years before having enough to make the short he had in mind.  Then it is over and maybe, very possibly, only a handful of people will see the final product or hear the original music written for it.  Soul work kind of .