So when guides give public tours of the houses in Ciwt's neighborhood, for some reason they begin at the top of the Alta Plaza Park steps looking across to the church in the distance.  Where?  Not just to the church but to the steeple tower.  Can you find it (in the approximate middle of the photo)?

Usually by the time Ciwt figures out what building they are talking about, the guide is well into their spiel about how the original steeple was destroyed in the 1906 earthquake, and they never rebuilt it.  Not a particularly electrifying beginning in Ciwt's opinion but probably an excuse to talk about about the 1906 earthquake - which always gets everyone's attention.

Today, continuing her recent 'Home' theme and after decades of walking by it, Ciwt explored St. Dominic's - on line and in person. On line she saw right away why they didn't rebuild the original steeple. Given how the fog rushes in and the wind howls in San Francisco, it is a wonder it even lasted from its erection in 1873 until the earthquake

In person, the church is gorgeous. Particularly the woodwork which was carved by the Edmund Schmid Woodcarving Studio of Oberrammergau, Germany.

In the old days, wood carvers were itinerant and carved individually in situ.  But by the time of St, Dominic's rebuilding in the 1920's, it had become customary for carving to be done by machine.  So it was a joy to see wood that - albeit it in Germany by contract - was carved by hand. 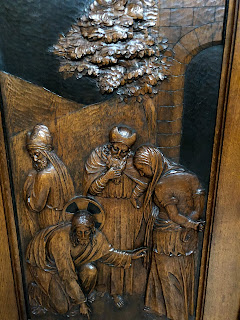 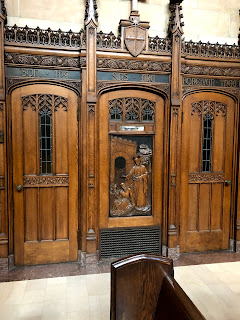 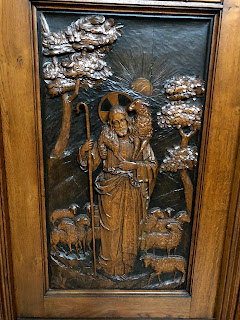