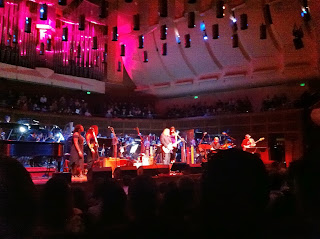 Needless to say hearing Grateful Dead music with Warren Haynes out front and a full orchestra behind is a unique experience. I enjoyed it; am not sure how long time Deadheads felt about it.  I believe to them there is something sacred about the jamming, the ex-ten-ded often joyous, always unpredictable trip through the songs.  And the simplicity of a few instruments, the guys they've known for decades playing.  The noise of it, the thrill of it, the moments of transportation; it has been said so many times, the only way you can understand the feeling of a Dead concert is to be there.  Period.  None of the recordings are worth a damn really.

So, no it wasn't a Dead concert, but there was much to be enjoyed and some joyous and poignant moments.  Warren Haynes did an extraordinary job, not just culling through the Grateful Dead book of over 80 long, complex songs, but arranging them to fit with a full orchestra while still leaving spaces for improvisation. Then playing and singing in front of the orchestra all-night-long, alone mostly with a couple of accompanists and vocalists and then a surprise visit by Furthur keyboardist, Jeff Chimenti, and Dead co-founder and Garcia best friend for 30 years, Bob Weir.  (Who looked and sounded wonderful!!)

I went up to the stage apron during the intermission when Warren was out there still working and tuning.  Some of his friends came up.  "How does the music sound?"  He wanted to know.  "It's a short break tonight; I'm working really hard."  I'll say!  But when performing he seemed utterly grounded,  perfectly present.  So talented, named something like 13 on Rolling Stone's list of the top 100 guitar players of all time.  But what really stands out about him is his deep,true and pure passion for the music.  It is almost as if he could just stand there doing nothing and you would get it.  Maybe that was the thing with Jerry; I never saw him in person, just a lot of catch up videos, but my sense is whatever he had went way beyond talent or even charisma.

The music sounded different.  You could pick out different origins - dixieland, Latin, some even sounded Cole Porter/Gershwin/Show Tuney.  With less noise and fewer transporting moments from the jams, I could really pick out the complexity of the songs and - even better - actually hear the words (Warren has a rich, clear, expressive voice).  The songs really are amazing, have endured and are still growing, ala doing them symphonic last night.  Jerry wanted that - the constant innovation, bringing the song into the moment, it was a deep belief.  And those words by Robert Hunter - what a fortuitous coming together - Garcia and Hunter.


Of all the words that struck me, I was left with a passage from Stella Blue.  Warren had the lights dimmed blue and sang it alone at the end of the show.  I was expecting some sort of Happy Birthday thing at the end.  But instead it was Stella Blue which I felt he felt was just right - and so did I.  Not a yay rah rah Jerry moment but poignancy, complexity, a sense of what a long, strange, demanding, rewarding trip the music world can really be; what it takes out and what it gives back and why if you are Jerry or Warren or a host of other people captured by music you have no choice but to keep riding it into the unknown. (Or, As Garcia and Hunter put it:
In the end there's still that song


down every lonely street


that's ever been).
The lyrics I took with me : 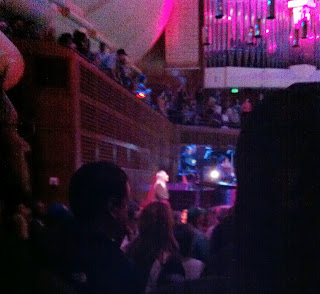