Much has been made of the rivalry between Matisse and Picasso whose lifestyles and aesthetics were markedly different.  In fact there was a bit of a faceoff shortly after the two were introduced by Gertrude Stein at one of her gatherings in 1906.  At that time the stocky, cocky Picasso was ruler of the turbulent Paris avant-garde art scene while Matisse was his usual more polished self constantly perfecting his art - already at a peak -  in private.

A beautiful testament of their friendship involves a bird.  Nearing the end of his day, Matisse gave Picasso, who loved birds and had canaries and pigeons, the last of his fancy pigeons - including his favorite of all birds.  A few years later, Picasso honored that gift by drawing its portrait on the famous Dove of Peace poster. 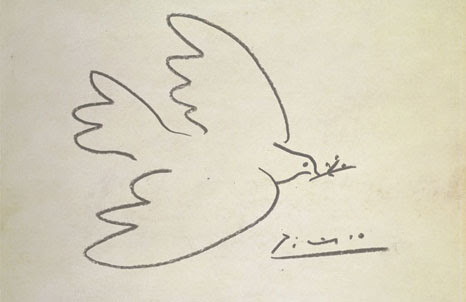