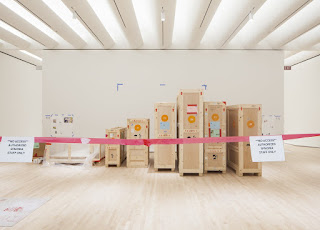 Remember the funeral scene in Charade when Lee Marvin put a mirror under the corpse's nose to see if he was really dead?  Ciwt felt a little like that today when she went to SFMOMA to check out if the Matisse Diebenkorn show really was over and off the walls.  Happily for her (but not Lee Marvin), Yes.

Ciwt actually likes museums just after an important show has closed.  It is a true after-the-ball feeling. Almost no one thinks to come view art that day, so the buildings are hushed and virtually empty. Except for the 'wrecking' and crating crews- and, hopefully later the cleaning crew because museums are usually pretty beat up from the huge crowds during the last days of a show.

Overall, Ciwt gives Matisse Diebenkorn a B+ for all that terrific art with an A for attracting visitors.  The show was packed from the day it opened until closing day - which happened to be on a holiday, so Ciwt can only imagine the scene yesterday. If, instead of being a direct M-D comparison,  the show had been presented as a marvelous happenstance of one artist in search of a teacher encountering a great artist going through a transition, Ciwt would likely up her grade to A for the whole show. That would have been a more interesting, full and accurate art story.

Oh well, too late now: No breath on that mirror.