So, on this Mothers Day Ciwt continued to keep neighborhood theaters alive by going to an early showing of Chuck.  When she got there, crowds of people were standing outside on the sidewalk, and a few minutes later, two hook and ladders showed up 15-20 minutes later the firemen gave the okay, and people began filing back in.  Or maybe not; Ciwt was the only one in Theater One where Chuck was showing. 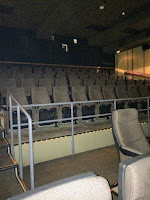 (The movie wasn't that bad, and Liev Schreiber was terrific.  Not a Mothers Day movie though).

After the movie, Ciwt went home to make a few Sunday calls - only to find her landline phones were all dead. While she was plugging and unplugging her phones in some attempts to 'solve' the problem, she heard some clatter on the streets.  Then louder and louder clatter, so she looked out and her window and saw Four! hook and ladders. 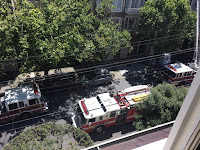 Right on her street!

And then a small army of fire personnel and two or three huge ladders were raised.  The firemen climbed 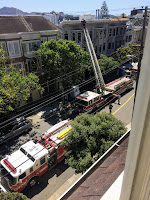 , the smoke poured out of top windows and then cleared, hot heavy things were dragged to the street and doused with something.  Ciwt kept watching wondering if she was going to have to grab Callie and go.....(who knows where).  But, about an hour later, the ladders came down, the firemen got in their engines, and truck by truck the street cleared.
For the heck of it, she checked her phones and found they were clear too!

Simply the most lively Mothers Day Ciwt has ever experienced.