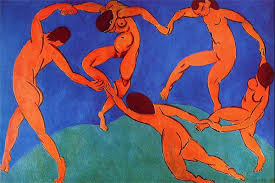 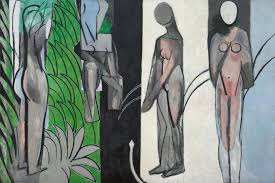 So, once again, here it is above: the shift in Matisse's painting during the years 1913-1917.  From: lyrical, bright, pure color, sensuality, curved forms, joy To: chalky, dull colors, sharp edged, enigmatic/mental, pleasureless.  Why? What was going with Matisse that brought his art to this place?

No one is entirely sure.  But three reasons stand out.  The first, of course, was the devastating emotional toll The Great War took on Matisse.

He volunteered to fight twice and was twice rejected due to age (44) and a heart condition. Deeply dejected by not being able to serve as his artistic colleagues and countrymen went off to war, he continued to paint as a matter of sheer will and as his only means of contributing to his country. The nearing German threat and general wartime turmoil kept Matisse precariously moving from studio to studio and then worsened when the Germans occupied Northern France where his family still lived. The Matisses could not get out and their famous son could not get in.  Later his two sons were both conscripted which added to his helpless worry.  Even before World War I Matisse suffered from chronic insomnia, anxiety and stomach disorders, and certainly his health issues must have been greatly exascerbated by the constant upheaval and fear for his family.

The war also exascerbated career decisions and deep aesthetic questions that Matisse felt compelled to answer.  The Great War changed the Paris art scene, interrupting international exchange among artists, drying up gallery life, cutting off Matisse (and all his artistic colleagues) from other financial life lines and their most appreciative audiences. The wartime city itself became impoverished, hungry, clothed in the dull colors of deprivation, restriction and depression. Life itself was in question; it was no time to paint exuberance.

But even before the war, Matisse had likely come to the end his Fauve color exploration and was probably wondering what his next artistic moves would be.  (You can actually see him experimenting in Bathers by a River which was begun before the war and shortly after Dance was completed). Cubism was certainly on his mind.  A variety of art movements were capturing the short attention spans of the art world, and Cubism had risen to promience.  Picasso, Braque and Gris and others to a lesser extent were now being shown, collected, reviewed as Matisse's star was dimming.

Matisse initially rejected the style for himself: Of course Cubism interested me, but, it did not speak directly to my deeply sensuous nature, to such a great lover as I am of line and of the arabesque, those two life givers. But it was not Matisse's way - which Ciwt finds incredibly commendable - to just dismiss an art style he could see had merits or to stop grappling with the artistic unknown. So from essentially 1913 to 1917 he worked to radically explore his art, discussing Cubism at length with his lifetime friend Picasso and Gris (whom he helped support financially during the war), experimenting with abstraction on canvas, seeing how and if it might work for him.

By 1917, the bridge experiment was over, the questions resolved.  Matisse never became the destructive Cubist, but he did develop his own type of abstraction.  He returned to color, although more controlled and muted than his Fauve colors. He decided angular, 'difficult' (for the viewer) intellectual art was definitely not for him.  And he returned to arabesques, women, birds, fabrics, flowers and moved into the next stage of his lifelong quest to find and release Joy through his art. Culminating in his Cutouts - his and one of the art world's most radical and glorious inventions ever. 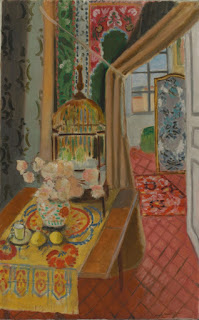