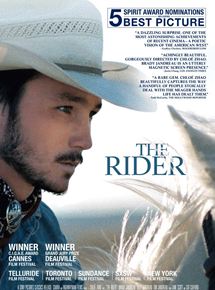 Ciwt highly recommends The Rider, her Cinema Club screening today.  Pure, deeply affecting, sensitive, beautifully acted and directed; she would even say sublime like spare poetry can be. *

But then several of her club members walked out on the movie, so maybe it won't be for you.
She's thinking the ones who left might be truer city slickers then Ciwt realized existed.  A few of them stayed, commented and left Ciwt slacked jawed.  According to one, she could not imagine why anyone would get on a bucking horse, fall off, then get on another one.  Another person informed us  "People play games depending on what is available where they live. These people on the plains only have horses so they play games with horses." Clearly they had literally never heard of rodeos muchless life on the plains, and Ciwt is guessing the ones who left hadn't either.  Wow!

Sometimes one of the most amazing aspect of Cinema Club is the difference in perspectives among the members.