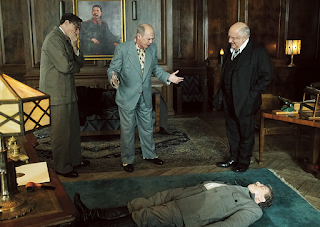 Sophisticated Sadistic Slapstick re: Stalin.  That's Ciwt's take on Death of Stalin, the movie.  (Don't know if the graphic novel it was based on was the same).  Not her style at all - except there were many moments that seemed very Monty Python which is definitely one of her humor styles.

She went because a friend recommended it.  He has lived internationally and writes about government and politics so Ciwt can understand why he enjoyed it so much.  (A huge number of Rotten Tomatoes critics as well).

Strangely enough, she came out of the theater in an up mood.  The movie moved along smartly, never a dull moment. The ensemble acting was superb.  Steve Busceme will likely get a Oscar and other nominations for Best Actor.  And the movie was so out of Ciwt's usual range it offered an opportunity for a real getaway.  Like going to a visually interesting country where you don't speak the language and just take things at face value. Or a non-English opera sung with no supertitles.
Posted by Ciwt at 3:49 PM