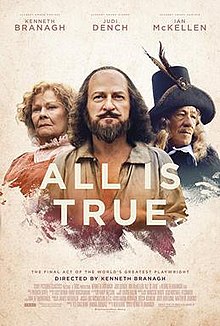 As one reviewer wrote in part "....I would have settled for some of it being interesting."  He's referring to the film All is True, produced, directed and starred in by Kenneth Branagh.  Ciwt wouldn't go that far although there are long stretches of utter dullness.  But there is one 8 minute scene with Branagh and Ian McKellen that is worth the entire price of admission for those who love the stage.

PS - Nearly all the 'truth' in the movie is debatable.
Posted by Ciwt at 4:44 PM