Maybe you remember the gorgeous remodeled Curran Theater from an earlier CIWT:

Here is today for its current offering The Jungle: 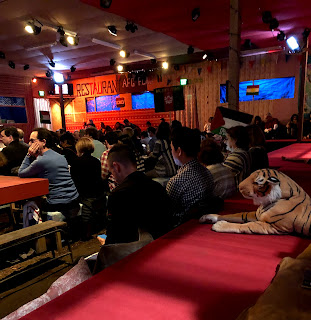 They somehow leveled the entire orchestra section, covered it with dirt and converted it into a makeshift refugee restaurant with the audience at the tables or, like Ciwt, on a pillow on the floor.
The audience members became refugees, part of the experience of those in Calais, France in 2015 waiting/hoping for passage across the English Channel to England.

Ciwt knew what was ahead when she bought her ticket for The Jungle, and she was concerned the play would be overwrought, emotional, political - ie, Hea-vy. But, no, it was human, humane, intelligent, highly entertaining and very thought-provoking.  Also a bit physically taxing; some audience members had to get out of the way of the action or were seated in the midst of it.  Ciwt and the long legged, spike heeled woman next to her just had to keep giving each other room to stretch our legs on the 'ground.'  But of course the inclusive discomfort and unpredictability was the point of The Jungle.
Posted by Ciwt at 6:41 PM