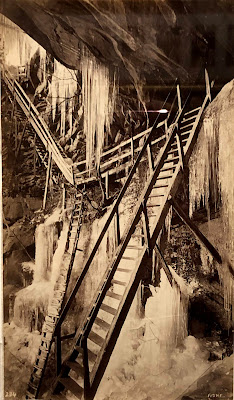 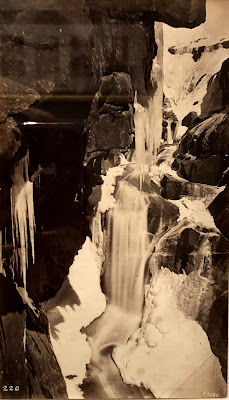 
Yesterday on her walk through the Presidio's Society of California Pioneers Museum Ciwt was introduced to the photographs of George Fiske (1835-1918).  Originally from New Hampshire, Fiske came to California to seek his fortune and in short order became the first year round photographer in Yosemite.  He established his studio in the Valley in 1879 and sold his work to tourists from his small shop in front of it for thirty-nine years.

Ciwt was very impressed with Fiske's eye and his evocative  images, so modern for his time and so cutting edge even today.  But don't take Ciwt's word for it when you could hear the world renowned Ansel Adams thoughts on Fiske's work:

After Fiske's death in 1918 his surviving negatives were discovered in the attic of The Yosemite Company's sawmill.  Then a young apprentice, Adams was hired to print them and advocated for their careful preservation.  Unfortunately to no avail and the sawmill with the remaining negatives was burned to the ground in a calamitous fire.  Years later, Adams wrote "Had that not happend, Fiske would today be seen as a top interpretive photographer.  I really can't get excited about Watkins or Muybridge.*  I do get excited by Fiske.  I think he had the better eye."