The Thinker in Golden Gate Park?! Ciwt was shocked at the California Pioneers Museum to see an early 1900's photograph of Auguste Rodin's monumental statue pondering (or brooding) in front of Golden Gate Park's Conservatory of Flowers.

The entire time she's lived in San Francisco  The Thinker has occupied its famously prominent place in the courtyard of the Legion of Honor. So Ciwt had forgotten to remember that there was a time lag between his arrival in San Francisco and the opening of the Museum (Big) Alma Spreckels built, filled with Rodins and other significant art works and donated to the City of San Francisco. 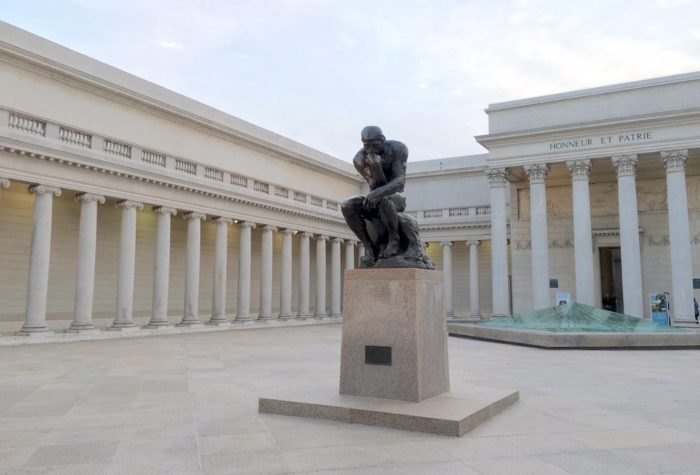 Big Alma (her beloved nickname) acquired her copy of The Thinker* from Rodin personally in 1915 in Paris after she was introduced to the artist by their mutual friend Loïe Fuller. Later that year and ahead of the Great War, the statue was shipped to San Francisco and included in the Panama-Pacific International Exposition.  (This seemed a near impossible feat to Ciwt until she learned the huge bronze is actually hollow up to the shoulders and made of two casting: one of the seated figure and the other of the rock he is crouched on).

After the Exposition closed, The Thinker was moved to the Golden Gate Park location Ciwt saw in the photo at the top of the page.  And there it stayed until the Legion of Honor was opened in 1924.

Okay, now Ciwt has one less thing to scratch her head about.

* There are several copies of The Thinker exhibited throughout the world (Cleveland, Philadelphia, Buenos Aires,  Moscow, Tokyo among the sites).  The original was purchased and installed outside the Pantheon in 1906 as a gift to the city of Paris. It was moved to the gardens of the Rodin Museum in 1922.

Many/Most Rodins are posthumous casts, some quite recent, commissioned by collectors.  Our/Alma Spreckels' Thinker is particularly valued by scholars because it was made by the artist himself, or under his supervision during his lifetime.  Thus it is assumed to represent Rodin's own vision of its finish and final appearance.