Walk: Hood
Distance: Short mile just to get out 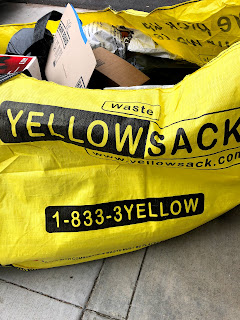 So like many of her neighbors near and far, Ciwt has been deeper into her closets and drawers than she thought she ever would be short of moving.  And as her storeroom fills with 'donations,' she wonders if Goodwill or any of the 'usual suspects' will once again be allowed to take them. From there, it isn't much of a leap to "Whatever will Ciwt do with these things?"

The other day, she saw a Yellow Sack on the sidewalk.  Maybe that is the answer; you buy one, put it on the sidewalk, fill it and they pick it up on 24 hour notice.  But ...looks like every pick up is at least $130 and there are tons of work arounds for where you are allowed to place the sacks.  So she'll be holding off and hoping Goodwill will be back in action.  (Also that her near neighbors don't decide to go the sack route because they are quite an eyesore.