So today's 'art quiz' is a bit more difficult that yesterday's, at least for non-traveler Ciwt.

It involves a series of woodblock prints by Hiroshige titled 53 Stations of the Tokaido.  You've probably seen images somewhere in your travels, but what do you know about them? 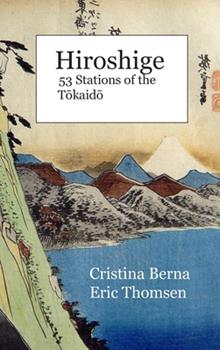 1. Who is/was Hiroshige?
2. When did he make his series?
3. What is/was the Tokaido Road?
4. Where is it, how long is it and how was it traveled?
5. What are some modern spin offs from Hiroshige's  series of prints?

Ready to compare your answers with 'the facts?'

1. Hiroshige (1797-1858) was a Japanese master artist who was born in Edo as Tokutaro Ando and was bestowed with his artist name, Hiroshige, by his first and celebrated teacher Utagawa Toyohiro.

3. The Tokaido Road, roughly meaning 'eastern sea route,' was the most important, scenic aand best traveled of the Five Routes connecting Kyoto to Edo (modern day Tokyo), the imperial capital.  It was inaugurated in 1603 (along with the other routes) by the ruler of Japan and was almost immediately thronged with Japanese merchants, farmers, and peasants enjoying the newly relaxed restrictions on travel.  Twice yearly the daimyo, or feudal lord ruling class, made their required entourages to the seat of power in Edo - sometimes with caravans of as many as 20,000.

4. The Road is 319 miles long originally with 53 government-sponsored stations along the route with horse stables, lodging, food, and other amenities. Social status was indicated by the manner of trave:  the daimyo and upper classes traveled by norimono (litters)

and those with less funds were carried ion the much more cramped kagos.

The majority of the travelers were pedestrians.

No matter what their status, most people at some point traveled by boat to get across the wild-flowing rivers encountered along the Tokaido.  The length of time to make the entire journey on foot  between the two important cities was dependent on weather; in ideal weather it could be made in about a week, but if conditions were harsh, the trip might take a month.

5. Today the Tokaido corridor is the most heavily traveled transportation corridor in modern Japan.  Obviously it is no longer a footpath, but here and there remains of the original can be found and walked.  Meanwhile, for those not so industrious, there are board and video games