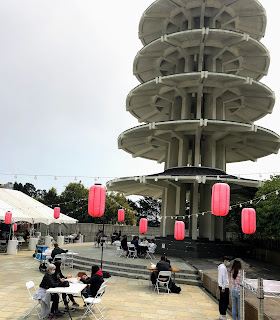 Lately Sunday has become Ciwt's 'travel' day.  Yesterday, after a few days avoiding the harzardous air from wildfires, a trip to Japan called to her.  Japantown that is, a few blocks away and an immersion into many aspects of Japanese culture.

The Japantown she went to is a revival of sorts of one of the original California Japantowns, so central to the Japanese immigrants who bgan moving into the area in 1906 after the earthquake and Great Fire. By World War II it was the largest of such enclaves outside of Japan, closely resembling the Ginza District in Tokyo. It was a place of community halls, churches, temples, Japanese food, and a neighborhood of residents, cultural organizations, language schools, festivals and other uniquely Japanese gatherings.

Then came FDR's 1942 order which forced all Japanese citizens of the United States to be relocated and interred in camps.  A sad topic beyond today's CIWT.  Following the war some Japanese returned along with new immigrants and investment by Japanese companies but many found other parts of the city to begin new homes and businesses. Finally though a firm Japantown foothold began being re-established with the development of the Japan Center in the early 60's.

The centerpiece of of the new Japan Center is the Peace Plaza built almost entirely with funds from its sister city, Osaka, as a symbol of Japanese goodwill and friendship.  And the crown jewel of the Plaza is most certainly the Peace Pagoda.  The designer of it was a noted modernist architect, Yoshiro Taniguchi, who rejected the typical square-roofed temple design in favor of a many-storied circular roof inspired by miniature pagodas placed in ten temples by Empress Koken ca 770 A.D. 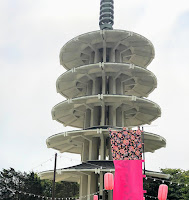 Today Japantown is once again home to Japanese cuisine, supermarkets, indoor shopping malls, hotels, banks and other shops including one of the few U.S. branches of the Kinokuniya bookstore chain.  Children play in the Plaza, rallies and political announcements are made there.  It celebrates two major, hugely attended festivals every year, the two weekend long Cherry Blossom Festival and the NihonmachiStreet Fair. And there is a strong possibility that its future will be even more active when this fall (fingers crossed) the voters approve a $25 million redesign and renovation project.  Japantown is shovel ready for that!

Even now, after a long and difficult history, Japantown is once again a true community place for San Franciscan Japanese as well as an interesting, lively, authentic destination for traveling and local visitors such as Ciwt. 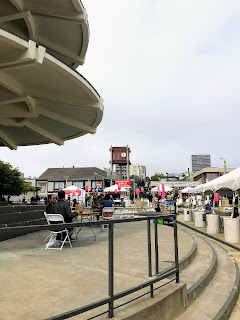