A while ago Ciwt let herself get lured into comparing her NYT news awareness skills with a friend and her family, - all of whom seem to be professional news quiz takers.  Each week she becomes aware of the gap between what she thinks she knows about current events and the actual facts.  That unfortunately has put her in touch with some of those gaps in her art knowledge.

For instance, she thought she was familiar with this famous poster: 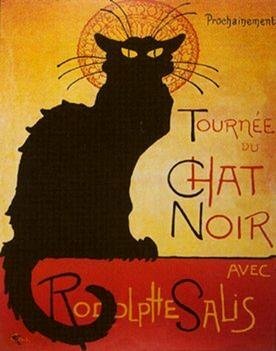 Maybe you are as well.  Well, let's test that familiarity with these questions.

Have your answers?  Okay, let's see how you did.

1. Le Chat Noir was an 19th century entertainment establishment in the bohemian Montmartre district of Paris and is believed to be the first modern cabaret.  It also functioned as a salon where
artists met, and it published a weekly magazine with literary writings as well as news of Montmartre.

2. It's owner was the empresario Rudolphe Salis.  He opened Le Chat Noir in November 1881 and his death in 1897 is the probable reason it closed shortly thereafter.

3. The artist is Theophile-Alexandre Steinlen (1859-1923).  He was an Art Nouveau printmaker, issustrator, painter and sculptor who moved to Paris with his wife and daughter in 1881 and made Montmartre his home.  He illustrated various magazines and books by Guy de Maupassant and the poet Anatole France.

4. Yes!  As a young schoolboy he fondly (and skillfully!) drew cats in the margins of his textbooks, and when he first got to Paris his cat sketches were so popular he was able to sell them to support himself and his family.

His home in Montmartre was well known by the neighborhood cats who were welcome to prowl around his studio in whatever numbers decided to arrive. Perhaps the cats sensed Steinlen respected them.  He and portrayed them as elegant and sophisticated, not cute and mischievious like most artists depicted them in the 19th and early 20th centuries.