So, being a certain age Ciwt is mindful of not becoming a "remember when" person.  But today she zoomed a presentation on grand old department stores that brought back memories she hasn't quite shaken.  Good ones, yes, there was nothing like cruising the aisles of Bendels or Bonwits or Lord and Taylor and maybe even making a purchase.  So splendid and pampered; it felt like hobnobbing with royalty.

But then there is Ciwt's memory of her first 'big city' job which isn't so great.  She wanted to spend a summer in San Francisco during one of her college break, and her father helped by arranging a job for her there.  The first morning after she arrived, she put on a nice suit and took the cable car to I. Magnin which turned out to be San Francisco's poshest department store.  All excited, she gave the guard the name of the woman she was to check in with, her boss, and he escorted her to the elevator.

See the wreaths in this picture of Magnin's? 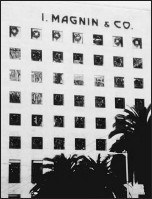 That's the top floor which is where Ciwt was headed.  And where she stayed all day long except for a half hour lunch break. In other words, she was not to be hobnobbing.

The job her father had arranged - or maybe he just told his contact there "put her wherever she's needed" - was as a 'tube girl.'  Like these women (a generation older than Ciwt!) are doing

- except they are seated whereas the I. Magnin tube girls stood all day.  No chairs anywhere.  All the faster to race over to a tube

that had been filled with cash, or receipts or messages and whisked up via compressed air from a glamorous floor to Ciwt's workroom.  (By the way those wreath windows don't let in any light).  The general noise level was like those hand blowers you find in rest rooms these days, and you knew a tube had arrived because it make a Thunk even louder than the blowers.  Also because Ciwt's boss spent all day watching her tube girls, yelling at us and scolding us if we didn't move instantly.  (Ciwt is pretty sure that she was being watched extra closely because her boss probably resented having to give a job to 'spoiled' college kid from back east).

At the end of the day, it was down the 'Employees Only' elevator and out a side door.  She can't remember if, as an employee, she was allowed into the 'royal' chambers on her days off.

Ah, first jobs, real life begins.  With recollections like these, CIWT readers can probably rest assured they won't be walked down (m)any more 'remember when' lanes.