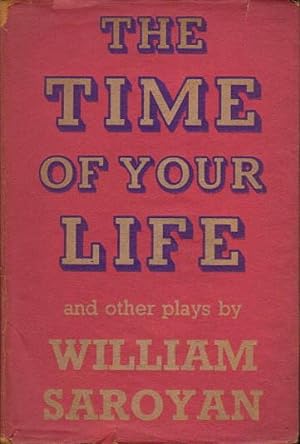 So Ciwt's Zoom "play night" is here again.  (See Day 9/183 for last week's play).  Ciwt read The Time of Your Life a few days ago and scanned it again today as well as watching about half of the 1948 movie version with James Cagney.  So, she's prepared, but no matter how many times she encounters the play, in whatever form, she can't quite learn how to shake the down mood it engenders in her.
William Saroyan wrote the play in 1939,  it was produced on Broadway shortly thereafter and went on to win the Drama Critics'Award and a Pulitzer Prize.  Not bad for a six-day writing stint!  In part of the prologue he says:

So Saroyan's objective was kind, gentle, loving.  But the effect on Ciwt is decidedly sad as well as wonderment at the playwriting feat Saroyan accomplished.
After her first reading she sent this brief take to the East Coast friend she's on this 'Broadway' adventure with.
Well, I read it - but not all or even any of the stage directions.
Didn’t care for it, but can understand why it won the prizes it did, particularly at the time it was written/produced.  Truly a brilliant capturing of the lives of those left out or just barely hanging into our economic system, the American infatuation with The Old West, violence, guns, rootless men, the second rate status of women who often are superior to the men, racism and more.   " No foundation "  as the Arab keeps saying.
Not uplifting, But...The characters aren’t defeated as they persistently (often drunkenly) angle for/cling to the financial windfall, all encompassing love, children, home, recognition in the arts, justice, etc that lie just ahead.
For me it wasn’t a word for word reading as much as an overall feeling for the whole of what Saroyan is saying. Sad, disturbing, made more so by how everything he writes about (unmasks) is totally with us today.