Oh dear, look at the signage.  It's in Japanese; Ciwt will never find a book here. 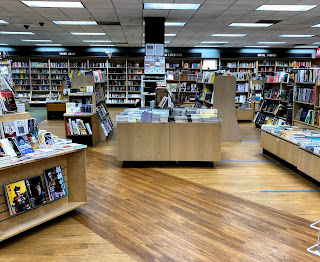 But turn right and look again; English!
And, wherever she looks there are wonderful books including best sellers and more esoteric subjects like 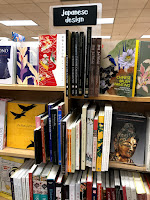 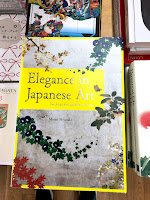 as well as watercolor books she can paint herself (if she could paint, that is), origami books with patterns she could fold herself (if she was a careful folder).  Gradually she feels her cramped covid19 mind enlarging, taking in the reality of another culture that, just like hers, values books.
This experience is what Books Kinokuniya brought to San Francisco's Japantown from Tokyo in 1947 in its first overseas expansion.  Some time after its founding in 1927, the largest bookstore chain in Japan, had made it a goal to cater to the interests of a wide, diverse clientele as well as its local Japanese clients. Since The Japan Center Books Kinokuniya has opened 13 more bookstores in the United States including New York City, Los Angeles, Austin, Seattle.*  It then ventured into the Asia-Pacific market (Taiwan, Indonesia, Malaysia and more) and launched its first outlet in Australia in 1996.
In all these places, perhaps and hopefully, Books Kinokuniya functions like it does for Ciwt every time she goes there - as an ambassadorship by books.
PS - Plus they speak CAT 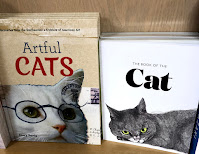