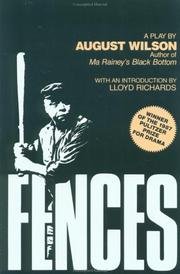 August Wilson's Fences is so poetically and musically written in what Ciwt will call Black speech pattern that her only comment is "read it when you have a couple of hours."
In fact, the benefits of reading rather than just seeing great plays is the strongest message Ciwt is getting from her Zoom Contemporary Plays Course.  Reading and visualizing the characters and stage settings as you do so.  You might be off in your mental picture, but just attempting it will bring you deeper into the play.  And you'll see words, phrases, patterns, connections you might miss by watching the play.
They are two different and important experiences - reading and seeing - that work together to really lift the playwright's characters and message(s) off the page.
PS - As 'perfectly' as Fences is written Ciwt has discovered on line that certain lines were cut and the ending was changed by the producer before it was played on Broadway - and won the Pulitzer Prize for Drama and several Tonys.  At the time of the awards, the young producer and Wilson weren't even on speaking terms (later reconciled) due to the changes so Ciwt will be curious to learn about them in tonight's class.