The Three Shades and Many Rodins -- Day 98

Walk: R/T Mindful Body and around the Palace of the Legion of Honor's hard floors
Distance: 1.5 Mile 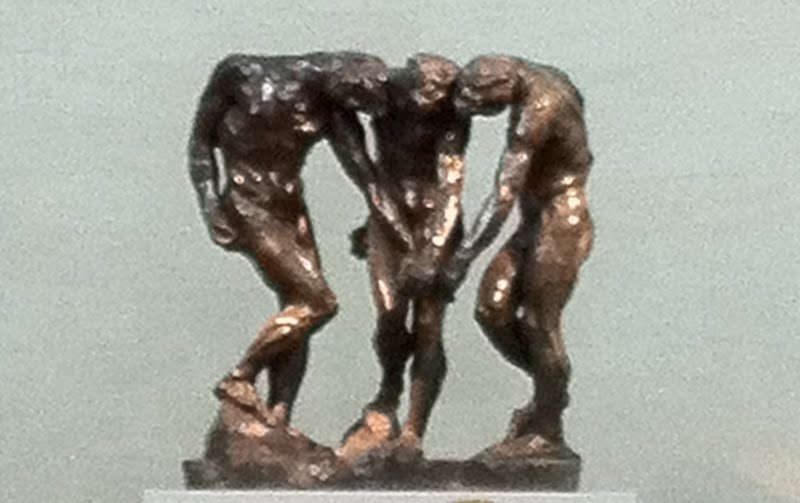 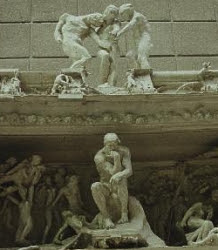 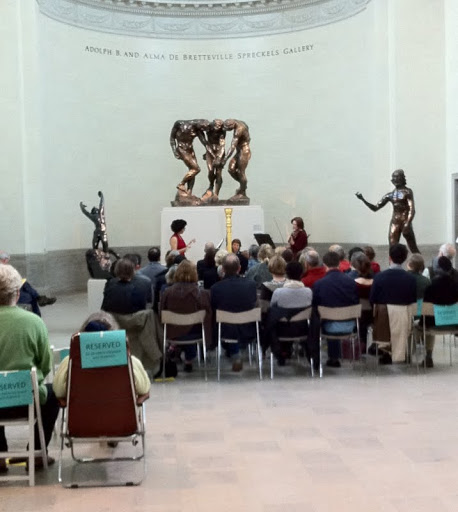 Today above, the Gold Coast Chamber Players at their concert at the Palace of the Legion of Honor (note also Rodin's The Prodigal Son on the left and his John The Baptist Preaching on the right).

Researching Rodin on line I see that the Legion (above) dates The Three Shades ca 1898 while the USC website dates the sculpture 1880. These different dates are almost certainly correct with each piece representing a different casting. But it is not impossible for the dates to be wrong because Rodin's artistic input in many of his sculptures was often to draw what he had in mind, then turn the drawing (which was sometimes a mere sketch) over to the 'maker' to do or oversee the rest of the process. In turn the 'maker' could have been employed at a foundry or have been any member of or team of members of Rodin's large staff of stonecutters, students and other workers who helped him produce his sculptures.

The waters become even muddier downstream from turning the drawing over to the maker(s)because Rodin's makers utilized or worked at several foundries throughout Europe. And, adding to the confusion, none of these foundries kept any recorded records of their castings. Nor was there any supervision of the molds with the result that multiple castings could have been and were made.

The coup de grace in all this chaos came when Rodin himself participated in the development of the castings and as a result of his method. Heading toward the final piece, Rodin would make numerous plaster castings, then, seeing them, he would make subtle changes and cast again. Almost treating each casting fluidly as a drawing he erased and revised. This working style added to the emotional humanistic realism and immediacy for which Rodin is so famous, but it also added to the possibilities for forgeries. One can imagine his studio filled with empty, unsupervised, unrestricted molds each one ready for forgery.

Then in 1916, to safeguard his ability to stay on at the Hotel Biron, Rodin bequeathed his estate to the French government for the installation of a Rodin museum at the Hotel Biron. At that time attempts were made to place a limit the number of each Rodin sculpture. But, those limits applied to Rodin himself, and when he died in 1917, the State of France then owned the “right of reproduction” to Auguste Rodin’s art.

This is just a thumbnail sketch of the long and vast confusion that surrounds the authenticity of Rodin's art. Certainly the Rodins in the public domain at the Palace of the Legion of Honor and at accredited art museums and institutions have been thoroughly authenticated. But if you are a new Google billionaire, I would caution you to be very, very vigilant if a dealer offers you a Rodin. There are many non-disclosed forgeries, many posthumously forged between 1962 and 2000 with counterfeit “A Rodin” signatures applied. Just remember, the dead do not sculpt or cast and they do not sign.

For the rest of us, Alma Spreckels who funded and founded the Palace of the Legion of Honor, was a personal friend and great collector of Rodin's and the Legion is a wonderful place to see and spend time with many true Rodin originals.