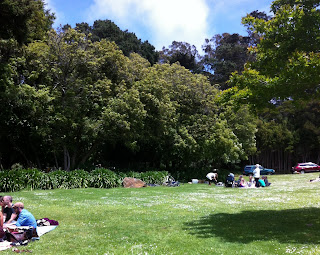 A few of us know this to be Yolanda's Rock.  Yolanda Bain was one of the most well-rounded and gifted yoga teachers I've known in the now 40 years yoga has been somewhere in my life.  She was beautiful, graceful, strong!, deeply spiritual humble but strong-willed about the things and people that she deemed meaningful.  In yoga teaching she pioneered so much about how yoga is taught today, including writing and one of the first professional yoga teacher training manuals.  Students came to her from all over the city, and there was even a feature article with pictures in the Chronicle about her - unsolicited and waaaay before yoga teachers became publicity hounds.  One of those students was me, and you can't imagine how honored (moved and shocked actually) I felt when she asked me to take over her Saturday class - the huge, 'famous' one documented in the article.

The reason she asked me is just awful.  At 45, in her beautiful, graceful youth, she was dying of ovarian cancer.  It was at her service that her husband, Matt, told all of us about Yolanda's Rock, and how she came over to the park often from their home and practiced yoga near, even on,  her rock. 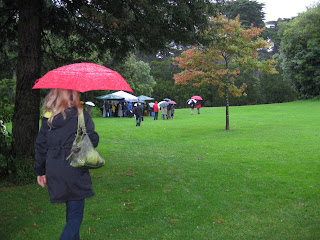 You can't see her rock because it is obscured by one of Yolanda's friend/students walking to the service.  It poured rain, then broke into beautiful sunshine for just a moment, then the rain and the tears flowed again.  Friends - including Bonnie Raitt - spoke, sang, played tributes, and you cold feel Yo's presence - maybe because she had become a part of all her students, friends, family so her presence was there actually as well as spiritually. 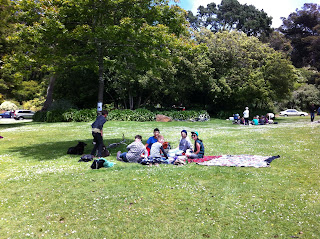 Today it felt good to touch Yo's rock and see the various groups of people picnicing around it on this Memorial Day Saturday, just after 'her' class. I never go into that room to teach on Saturday mornings without thinking of her. 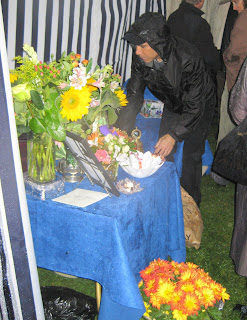 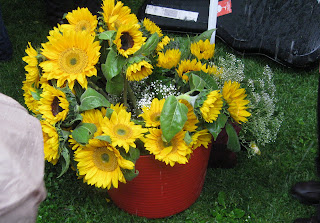