Branching out from Furthur tonight and going with rock band friends to see their friends perform.  The (Dean and Britta's) program is entitled: 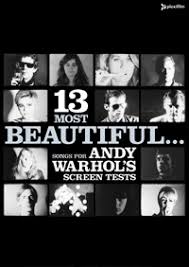 Dean Wareham and Britta Phillips, former members of the band Luna and now the duo Dean and Britta, present a multimedia event featuring a selection of Andy Warhol's Screen Test films with live musical accompaniment. As thirteen of Warhol's four-minute film portraits play, a four-member ensemble performs a composed score. This event is held in conjunction with the exhibition Regarding Warhol: Sixty Artists, Fifty Years.
This project was jointly commissioned by the Andy Warhol Museum and Pittsburgh Cultural Trust for the Pittsburgh International Festival of Firsts 2008.
This program is made possible by Campbell Soup Company. http://www.pwrnewmedia.com/2012/campbells/warhol_anniversary/index.html
Listen to a sample of Dean and Britta.