There's a relatively new yoga kid on the block called Shadow Yoga.  Our local paper wrote an article on it a few years ago (see link below) and one of the statements in the Comments section says something like "I'm quite familiar with yoga.  I read the entire article a couple of times, and I still have no idea what shadow yoga is."

I would add to that I've actually done shadow yoga several times, and I have no idea what it is.  Except the usual 'new' yoga modality: a chaining together of the ancient yoga forms, breathwork and philosophies and giving the same old stuff a different name.

There is an audacity to this that bothers me.  Oh well...ommm 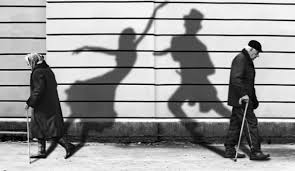