In the time of Louis XVI, the 'white gold' of France, more valuable than diamonds, was the white porcelain from the Sevres factory.  White and often encrusted with thick layers of gold gilt that is.

Real porcelain demands a certain type of soft paste from a rare clay. Only the Chinese and Japanese knew the 'recipe' until the French learned (one could say 'stole') the secrets to locating and firing it.  It is said that the secret was discovered by a Jesuit cleric in the Far East who sent it in private letter to his superior in France.  And when the French found the equivalent clay for the soft paste, no expense or energy was spared to locate the finest craftspeople and artists to create the Sevres pieces.


So valued was French porcelain that it was given as the royal gift to royals from other countries.  Once the King of Sweden arrived unannounced at Versailles for a visit.  Louis XVI of course had to offer him a treasure to take with him in gratitude for his presence.  So, he diverted an entire multi-piece serving of porcelains that had been ordered produced by and for Marie Antoinette and presented it to the Swedish King.  Then another set was produced for Marie - requiring many years of precise and concentrated work at the Sevres factory. The cup and saucer below are not that pattern, but certainly of the same quality. 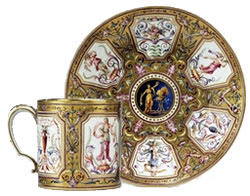 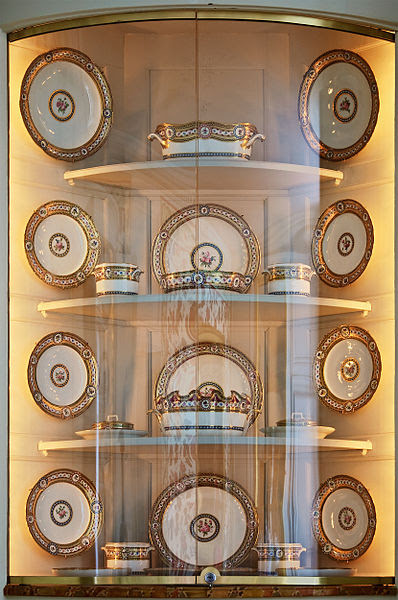 PS - Here I believe is the exact porcelain.  This is the second version belonging to Marie Antoinetter after her first set was presented as a gift by Louis XVI to the King of Sweden.