I'm a sucker for 'true' sports movies and really enjoyed '42' a new movie about Jackie Robinson's early years in baseball.  Maybe because the movie was so concentrated on just a three year period I left the theater curious to learn more about Robinson and Branch Rickey (the Brooklyn Dodgers manager who made it his mission to bring a black man into Major League Baseball and scouted the country until choosing Robinson for the job).

Both men were heroic for the courage and characters.  And both - particularly Robinson - were superior athletes.  Robinson was the first the letter in four sports at UCLA before which in high school and junior college he excelled at virtually every sport he encountered - including tennis in which he was a junior champion.  Baseball was in fact his "worst sport," and he began his playing career in football.

An interesting, complex, deep man and athlete.  42, about him, the Dodgers, Rickey, early integration of baseball is not surprising (as none of these sports movies are) but is well acted, told with a lot of 'truthiness, and thought-provoking. 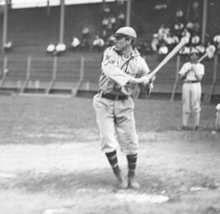 Branch Rickey batting for the Browns in 1906
http://en.wikipedia.org/wiki/Branch_Rickey 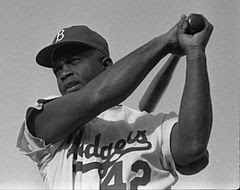