Like many of us movie buffs I remember Roger Ebert first as the pudgy guy  in the Shetland sweater sitting 'in the balcony' with his film critic partner, Gene Siskel.  I remember knowing I'd probably disagree with almost all of his selections because they would be 'All-American' and simplistic and his reviews would be based on facile things like 'Aww' or 'too depressing.'  (During this time, by the way, he was the first film critic Ever to be granted a Pulitzer prize for his film writing - so you might take my assessment of his film assessments with a grain of salt.  But still I believe I was right).

But, oh my, did he grow over the years - as a critic and as a deep human being.  (Also losing weight for sad reasons).  The growth was gradual, but I began to think his analyses were more reasoned and deeper than his supposedly 'more intellectual' partner.  Probably Gene Siskel's death at a young age deepened Roger Ebert more.  He'd lost a sparring partner and, by then, a respected friend.  Theoretically, with the passing of Siskel,  he'd probably also moved into complete intellectual freedom and sole stature.  There were guest critics trying out for Gene's place on the balcony, but they were Roger's guests, not his equals.

Then it was announced he had cancer.  There was 'time off' for him to recover, and for a short moment he did.  But then almost immediately there was a disastrous complication from which he never recovered.  I believe his whole jaw bone was removed and he lost his abilities to either speak or eat.

But he didn't lose his ability to write.  And with his writings and the whole amazing way he led his life from this point on, he moved into the ranks of nobility.  And so did his film activities, blog and reviews. To the end, he grew in depth and every one of his reviews became a profound, educational treasure.  From his mind, his heart and, apparently, his soul he would evaluate the acting, the film techniques, the historical context, the moral context and more in such a manner that the reader would sit at his feet and learn. All in the prescribed space of a newspaper review.

Many of his readers were either film buffs or critics themselves.  But he wasn't particularly after them and really didn't have ego by the end.  He knew he was the best but didn't care because larger than him were Movies which he revered and which he dedicated his life to bring to buff and the 'common' movie goer alike.

I learned a lot from him - as a film lover and critic and as a person.  I will miss him. 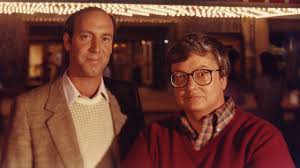 http://rogerebert.suntimes.com/
Posted by Ciwt at 6:18 PM