The part of me that vaguely thinks of spending a year in Europe had a reality test at the San Francisco International Film Festival this afternoon.  The movie was The Artist and His Model,  the soundtrack was French and the subtitles were randomly m.i.a..  Ie, there would be a subtitle or or two then pure French for about ten minutes then another subtitle then another lengthy return to French soundtrack.

Since I took French from 8th grade up to sophomore year in college, I was interested to experience how I would do in a prolonged purely French situation.  Turns out, I'm about as random as the subtitles, picking up a word, a phrase, even extended sentences.  But clearly a year in France would be quite a challenge - and isolating - at this point.  Good to know.

Meanwhile, back to the movie. Not having much insight into the dialogue worked both ways.  Almost from the title you have an excellent idea what the theme(s) of the movie will be. And you're correct, so you understand what you've watched.  On the other hand, since the themes - art, inspiration, old age - are time honored in literature and film, the verbal subtleties and plot are necessary to set this particular meditation apart. And of course those things were not available unless you were fluent in French.

From what I could tell, the movie was essentially a movie-maker's movie requiring patience, appreciation for older actors at the top of their craft, endless interest in the end of the old, pre-technological ways, deep admiration for restrained, artistic camera work.   These qualities are all good, but I left with a sense of remove from the movie that would have existed whether or not I'd been able to know all the words.  To a large extent, I believe this is because the main character is inaccessible; cynical, remote, vaguely unpleasant and certainly not a man whose sensitivities elicited much care or even interest. 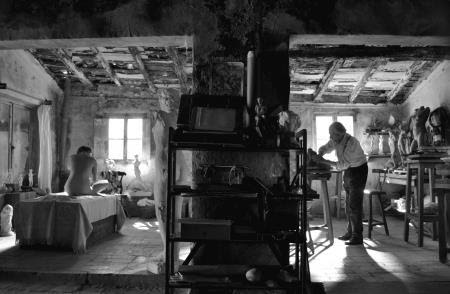