On her trip to The Richmond Art Center yesterday Ciwt had an opportunity to view intimate and loose works on paper done by Richard Diebenkorn during his Berkeley years (1953-1966).  And to remember Joan brown, the only woman who was sometimes at the regular, weekly Berkeley drawing group of artists that came to be known as the Bay Area Figurative Movement (primarily David Park, Elmer Bischoff, Frank Lobdell, Nathan Oliveira, James Weeks among others).  Brown herself is historically placed in the 2nd generation of that movement.

Joan Brown, After the Alcatraz Swim, 1976, enamel on canvas

In the 1970's Brown produced autobiographical works based on actual and imaged events.  She was a swimmer in amateur competitions; in 1975 she and a group of others nearly drowned during a swim to Alcatraz when a passing freighter swamped them. 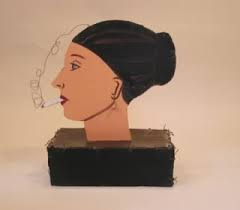 Then in the late 1970's Brown became increasingly interested in spirituality and New Age idea.  She made a number of trips to India, withdrew from painting and concentrated on public sculpture.  She died in 1990 while installing an obelisk at the Sai Baba Eternal Heritage Museum in Puttaparthi, India.